Thousands of protesters marched through the Mexican capital on Saturday against president-elect Enrique Pena Nieto, accusing him of buying votes and paying off television networks for support.

Pena Nieto won Sunday’s election by almost 7 percentage points, according to the official count, returning the PRI to presidential power after 12 years in the wilderness. The PRI previously ruled Mexico for seven decades, during which time it was accused of rigging elections and repressing protesters.

“The PRI threatens many people and buys others with a couple of tacos,” said Manuel Ocegueda, a 43-year-old shop worker participating in the march.

Pena Nieto is due to take power in December, replacing Felipe Calderon of the conservative National Action Party, or PAN.

The constitution barred Calderon from running for a second term. The PAN candidate, Josefina Vazquez Mota, finished third, with many voters dissatisfied over relentless drug violence and sluggish growth.

Leftist Andres Manuel Lopez Obrador finished in second place, but has refused to concede, accusing Pena Nieto of stealing the presidency. He was runner-up as well in the 2006 presidential race, but by a much closer margin, after which he also said there had been fraud and led major protests.

Lopez Obrador has so far stayed away from protests – he denied any involvement in Saturday’s march – but says he will mount a legal challenge to Pena Nieto’s victory. He said that he has evidence of vote-buying, and plans to file an appeal in court next week.

Pena Nieto denies any wrongdoing, and PRI officials say they could sue Lopez Obrador over the accusations.

Mexico’s electoral tribunal has until September to evaluate any complaints and officially name Pena Nieto as the next Mexican president.

Calderon has congratulated Pena Nieto on his electoral victory, along with dozens of world leaders. 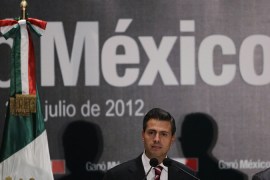 Official count gives Enrique Pena Nieto 38 per cent of vote, seven points and 3.3 million votes ahead of next candidate. 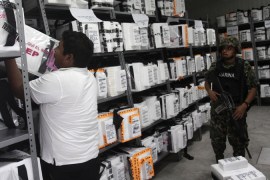 Electoral officials recount votes from over half of polling booths presidential election after allegations of fraud.