Philippine senators have voted overwhelmingly to convict Renato Corona, the country’s top judge, for failing to declare $2.4m in bank accounts after a trial that lasted five months.

Al Jazeera’s Marga Ortigas, reporting from the capital Manila, said more than two-thirds of the senators voted on Tuesday to impeach Corona, effectively removing him from office.

The senators were expected to deliberate on the penalty immediately after the verdict.

The trial is the first of its kind in the Philippines that has been brought to a proper conclusion, our correspondent said.

“The majority of Filipinos, according to the surveys, felt that it was a fair trial,” she said.

“Everywhere you could find a TV or radio [set] people have been paying attention. So they’ve felt very involved in the proceedings in the senate.”

She said that most people agree though, that this is “just the beginning of a whole new book in Philippine politics”.

Corona, the first Philippine supreme court chief justice to stand trial for impeachment, had been accused of hiding millions of dollars in assets, lack of integrity and amassing a fortune beyond the limits of his salary.

Speaking after his conviction, he denied wrongdoing and said “bad politics’ had prevailed in his trial.

“I have not committed any wrong,” he said, but added that “if this will be for the country’s good, I am accepting the difficulties we’re going through.”

Corona’s lawyers said earlier in the week that they could take the case to the supreme court if he was found guilty. Legal observers said if he was ordered to step down but refused pending an appeal, it could lead to a constitutional crisis.

The 63-year-old denied concealing dozens of properties and millions in assets when he took the witness stand last week.

Corona also denounced the case which Aquino sees as key to rooting out corruption.

“Why is this administration so mad at me?” he said in a statement last week. “This case was filed without evidence. They broke all laws to fish evidence against me.

Corona said $2.4m that he had not declared was protected by a law allowing absolute secrecy for foreign currencies, and the other money in Philippine peso accounts belonged to his relatives.

Franklin Drilon, a member of Aquino’s party, said as he voted to convict Corona: “He has lost his moral fitness to serve the people. He has betrayed the public trust. He cannot be the chief justice a minute longer.”

The impeachment trial has been closely watched, as it involves former president Gloria Arroyo whom Aquino has accused of illegally appointing Corona just before she stepped down allegedly to protect her from prosecution.

Arroyo is now in detention while separately being tried for vote-rigging.

The current president was elected in 2010 on a platform to end corruption, which he claimed reached pervasive levels during Arroyo’s nearly 10-year rule. 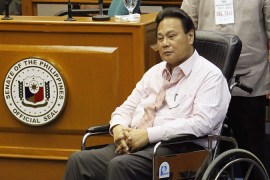 To acquit or to convict the Philippines’ top judge – that was the question. And the bottom-line for most of the senators-turned-judges was that there was enough evidence to doubt the integrity of the country’s now former top judge. 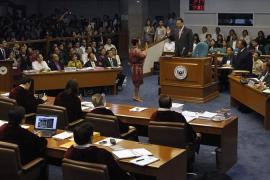 Chief Justice Renato Corona’s impeachment trial has been a soap opera-like saga that has had Filippinos gripped. 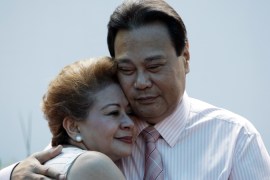