Mali’s embattled transitional government has rejected the declaration by an alliance of northern rebels of an independent Islamic Tuareg state.

“The government of Mali categorically rejects the idea of the creation of an Azawad state, even more so of an Islamic state,” a government official told the AFP news agency on Sunday.

“Even though this state creation is just on paper and not de facto, we are coming forward to stress that Mali is secular and will remain secular,” said Hamadoun Toure, information minister in the transitional Malian administration.

The two groups that seized control of Mali’s north had announced that they agreed to merge and create an independent state in the northern half of the west African nation.

The merger, announced on Saturday, would see the Tuareg separatist-led National Movement for the Liberation of Azawad (MNLA), and Ansar Dine (Defenders of Faith) fighters join forces to nominally control an area the size of France.

“I have just signed an accord that will see an independent and Islamic state where we have Islamic law,” Alghabass Ag Intalla, a leader of the Ansar Dine, said.

The group is accused of being linked to al-Qaeda in the Islamic Maghreb (AQIM), a North African group responsible for dozens of suicide attacks as well as the kidnappings of foreigners, some of whom were later executed.

The Saturday evening agreement was signed in the northern town of Gao, with celebratory gunfire in both Gao and Timbuktu, another town under their control, marking the development.

The two groups had been in disagreement since March, when they took over the north of Mali and forced Malian government troops to flee south.

Meanwhile, reports surfaced on Sunday that AQIM had seized an underground weapons and ammunition depot several days ago in Gao, which will vastly boost the group’s firepower.

Ansar Dine wants to impose Islamic law in the area they occupy, a move the secular MNLA had previously opposed.

Speaking to Al Jazeera from the UK, Akli Sha’kka, spokesman of the Tuareg Youth Movement, said that the merger was “a major turning point in Azawad history”.

“This [co-operation] comes after fraught discussions that have been taking place for almost a month now. The two groups still do not agree ideologically,” Sha’kka said.

“But the international community has to know that this will not be an extremist state. It is an Islamic state and the MNLA stated clearly at the beginning of the negotiations that Sharia law will not be imposed in the way that Ansar Dine was pushing for in the beginning.”

Abdel Fatau Musah, director of political affairs for ECOWAS, told Al Jazeera that the groups’ merger was an “opportunistic alliance”.

“The territorial integrity of Mali is non-negotiable,” Musah said. “Our offer of mediation is still on the table but the re-partitioning of Mali is off the table. ECOWAS is not going to entertain any negotiations with groups that we consider terrorist groups.”

“We are going to chase them out of that territory … from those population centres, and we have the means to do so.”

Ansar Dine had previously said they were opposed to the MNLA objective of creating an independent homeland for Mali’s Tuaregs, a goal they now say they are backing.

During the late March advance, residents said there were visible turf wars with the fighters occupying different areas of the cities under their control, as the groups’ two separate flags competed for domination of various landmarks.

In Timbuktu, the last major town in the north to fall to fighters from the two groups, the MNLA took over the local airport, located on the outskirts of town, while Ansar Dine installed itself in the military camp at the centre of the city.

The agreement suggests both sides have made major concessions in talks that have been going on intermittently for weeks, and likely increases the chances they will be able to combine their fighters.

Tuareg rebels, many of whom were mercenaries who had fought for Libyan dictator Muammar Gaddafi and returned heavily armed to their homeland, rekindled their decades-old struggle for autonomy with a massive offensive in January.

They were joined in March by Ansar Dine, a previously unknown group led by a senior figure of the 1990s Tuareg rebellion.

The north of Mali fell after a coup d’etat in the capital Bamako on March 21 left government forces disorganised and lacking motivation to fight.

The transitional government of Mali says it wants to take back captured territory but has so far been too distracted by issues of restoring political stability in Bamako to focus its attention on the issue of the north. 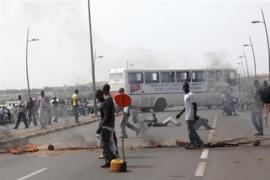 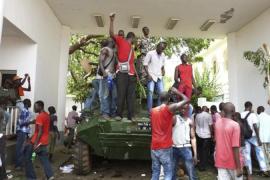 Dioncounda Traore is ‘recovering’ after he was beaten up by protesters demanding his resignation. 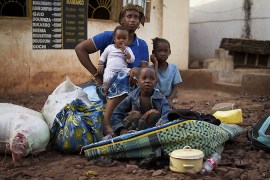 Group reports abuses including rape and use of child soldiers by Tuaregs and other fighters, and killings by soldiers. 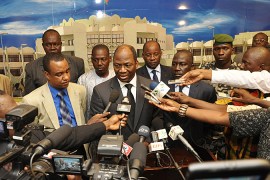