Mexican authorities have found the dismembered bodies of at least 50 people stuffed into bags and dumped on a main road leading to Texas near the northern city of Monterrey, in what appeared to be the latest in a string of drug gang killings.

The bodies were found in the early hours of Sunday, sparking a large deployment of local, state and military officials to the scene, the Excelsior newspaper reported on its website.

“What’s complicating the identification of all the people was that they were all headless,” said Jorge Domene, the Nuevo Leon state government’s spokesman for public security, who added that many hands and feet were were also missing.

The bodies were being taken to a Monterrey auditorium for DNA tests.

Al Jazeera’s Franc Contreras reporting from Monterrey said: “The government is now gathering of DNA evidence and doing a very careful check of [criminal] databases in the country. The government is speculating that the victims might be immigrants, but that remains speculative. It is perhaps more realistic that these are members of rival drug gangs.”

The bodies were found on an isolated stretch of the road, scattered in a pool of blood at the entrance to the town of San Juan, on a highway leading from Monterrey to the border city of Reynosa. A white stone arch welcoming visitors was spray-painted with black letters: “100% Zeta.”

The victims could have been killed as long as two days ago at another location, then transported to San Juan, said state attorney general Adrian de la Garza.

De la Garza said he did not rule out the possibility that the victims were US-bound migrants.

Only one couple looking for their missing daughter visited the morgue in Monterrey where autopsies were being performed on the mutilated bodies on Sunday, a state police investigator said.

The officer said none of the six female bodies – some of which were badly decomposed – matched the missing daughter’s description.

Suspected drug gang violence has flared up across the country this month, with scores of deaths attributed to massacres between the two largest drug cartels and clashes with security forces.

Just a few days earlier, there were 23 killings in the city of Nuevo Laredo, in Tamaulipas state adjacent to Nuevo Leon on the US border, where nine people were found hanging from a bridge and 14 others that had been decapitated.

Authorities have blamed much of the deadly violence on battles between the Zetas, a gang set up by ex-commandos, and groups allied to the Sinaloa Federation of Mexico’s most wanted drug lord, Joaquin “El Chapo” Guzman.

“This is the most definitive of all the cartel wars,” said Raul Benitez Manaut, a security expert at Mexico’s National Autonomous University.

The Zetas are a transient gang without real territory or a secure stream of income, unlike Sinaloa with its lucrative cocaine trade and control of smuggling routes and territory, Benitez said.

The government’s success in killing or arresting cartel leaders has fractured some of the big gangs into weaker, quarreling bands that in many cases are lining up with either the Zetas or Sinaloa. At least one of the two cartels is present in nearly all of Mexico’s 32 states.

Under President Felipe Calderon’s nearly six-year assault on organised crime, the two cartels have become the largest in the country and are battling over strategic transport routes and territory, including along the northern border with the US and in the Gulf coast state of Veracruz.

Drug violence has killed more than 47,500 people since Calderon launched a stepped-up offensive when he took office in December 2006.

Mexico is now in the midst of presidential race to replace Calderon, who by law cannot run for re-election. Drug violence seems to be escalating, but none of the major candidates, Andres Manuel Lopez Obrador, Enrique Pena Nieto or Josefina Vazquez Mota, has referred to the body dumpings directly.

All three have said they would stop the violence and make Mexico a more secure place, but offered few details on how their plans would differ from Calderon’s. 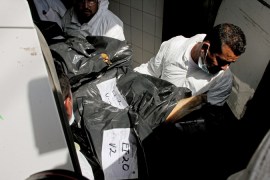 Eighteen bodies found in cars on road from Guadalajara believed to be victims of revenge killings in drugs turf war. 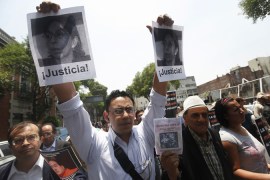 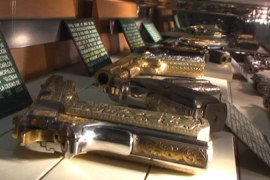 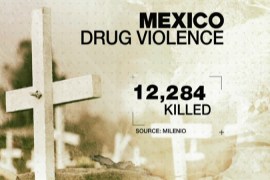 Local media estimates say more than 12,000 people were killed in drug-related violence in 2011.