China has told its citizens that they are not safe in the Philippines, in the latest development in a month-long row between the two nations over rival claims in the South China Sea.

Chinese travel agencies on Thursday said they had suspended tours to the Philippines, under government orders, while the Chinese embassy in Manila advised its nationals already in the country to stay indoors in run-up to planned protests.

“Avoid going out at all if possible, and if not, avoid going out alone. If you come across any demonstrations, leave the area, do not stay to watch,” the embassy’s advisory said.

A coalition of Philippine activist groups are planning to hold rallies at Chinese embassies around the world on Friday to support the Philippines in the dispute.

Organisers hope thousands of people will attend what they expect to be the biggest of the rallies, in Manila, and the Chinese embassy’s safety alert was circulated chiefly to warn its nationals about that protest.

The safety alerts came as the Chinese state media reported Beijing was prepared to use military force to end the standoff over the Scarborough Shoal islands that both nations claim as their own.

“No matter how willing we are to discuss the issue, the current Philippine leadership is intent on pressing us into a corner where there is no other option left but the use of arms,” the China Daily newspaper said in an editorial.

“Since ancient times, our nation has deemed war the last resort in handling state-to-state relations. But Manila is living in a fantasy world if it mistakes our forbearance for timidity.”

The two nations have had non-military vessels stationed at the shoal since April 8 in an effort to assert their sovereignty to the area.

The dispute began when Philippine authorities in April detected Chinese ships fishing there. They attempted to arrest the crew, but were blocked by Chinese surveillance vessels that were quickly deployed to the area.

The shoal sits about 230km from the Philippines’ main island of Luzon. The nearest major Chinese landmass is 1,200km northwest of the shoal, according to Philippine navy maps.

The Philippines insists its claims to the area are backed by international law, but China claims virtually all of the South China Sea as its territory, including waters close to the coasts of the Philippines and other Asian countries.

Taiwan, Brunei, Vietnam and Malaysia also claim parts of the sea, which is believed to sit atop vast oil and gas resources. 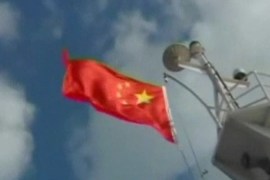 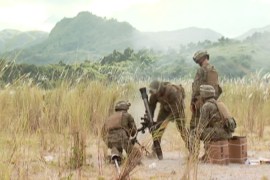 Tensions as Philippines and US conduct drills 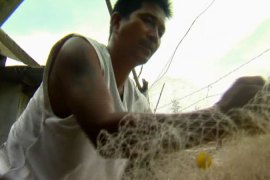