Few inside Libya or outside had heard of Tayeb El Safi, a shadowy but trusted aide to former Libyan leader Muammar Gaddafi for decades.

El Safi is one of two Libyan officials whose wiretapped mobile phone conversations were obtained by Al Jazeera. As the uprising began in February, Gaddafi had entrusted him with the task of putting down the protests in eastern Libya.

He spoke frequently with informants in Benghazi and elsewhere, who updated him on the growing opposition movement and advised him on strategy. El Safi also helped to plan the government’s propaganda, everything from stage-managed “green protests” to fabricated funerals.

His efforts, of course, would be in vain. El Safi slipped away from Libya last year, resettling in Egypt, where he remains to this day, despite the National Transitional Council’s efforts to have him extradited for trial.

The close relationship between Gaddafi and El Safi becomes apparent in several personal conversations. In a March 9 talk, El Safi tells Gaddafi that he is in Tripoli. “That’s good. If you were in Benghazi, they would have slaughtered you, Zarqawi style,” Gaddafi jokes, referring to Abu Musab al-Zarqawi, the former leader of al-Qaeda in Iraq killed in an American bombing. Both men chuckle at this bit of gallows humour.

Gaddafi also directs a little criticism at his aide:

Gaddafi: This is your moment, where is the revolutionary spirit I have been teaching for 40 years? You were like a kitten, and I educated you.

El Safi: You are right.

Gaddafi: I found you in Tajura, and you were wearing sports clothes. I came to you and brought you with me. I hope you are okay.

Yet despite their close relationship, El Safi’s background was a bit of a mystery among Libyans. Many say they only learned about Gaddafi’s henchman during the revolution. He was well known to a network of informants in the east – but not to the Libyan public at large.

In a conversation on February 16, one of those informants warned El Safi that his forces “were overwhelmed” by hundreds of angry protesters. He advised El Safi not to take aggressive action – not unless he could win.

Caller: I think the police should go there and surround them but not harm them.

But El Safi ignored that advice. He spoke the next day with Abdullah Senussi, the Libyan intelligence chief, and asked why the leadership hadn’t moved to squash the protests. “Nothing has been done so far,” he complained. “Why are we shy? These people are going to destroy the country.”

Gaddafi’s inner circle would later attribute their inaction to bad advice from their informants in the east. “At first, we were hearing that people were not calling for the removal of the regime. We were told they had demands,” said Fathi Naji, Gaddafi’s personal assistant, in an interview with Al Jazeera. “A delegation was sent to Benghazi to listen to the people. It’s probably that trip that went wrong. They were supposed to solve the situation, but it turned to violence.”

But the recordings reveal that, as early as February 17, other informants were warning El Safi that the situation was spiralling out of control. “They are even chanting against the leader,” one informant shouted into the phone. “Shame, Mr. Tayeb, we cannot wait. I will attack them with the revolutionary guards.”

A week later, in another conversation with Senussi, El Safi urged him to send the military east.

Senussi: Ask the protesters if Benghazi is important for them, because if necessary, we will use all our power to smash them. We will face anyone with force.

El Safi: Abdullah, tell the leader that we must control Benghazi. Don’t let it slip. Tell him to use force. They will be scared and stay in their holes.

By then, of course, it was too late; Benghazi had already fallen to the rebels, and they were moving westward. El Safi’s focus shifted to stopping their advance.

In a conversation on February 28, a caller urged him not to send aid to rebel-held towns in the east. “Let them starve and suffer,” he said. El Safi agreed, suggesting that the government “say that we do have aid for them, but just cannot reach them.”

It was shortly after this conversation that Gaddafi admonished his aide for a lack of “revolutionary spirit.” El Safi would respond days later by crafting a public relations exercise in Zawiya, a city west of the capital which had become a battleground between the army and rebel fighters.

El Safi: We will dress army soldiers in police uniforms. So it makes the army look like the police. We will bring the journalists there, since [US President Barack] Obama is talking about Zawiya. We will show schools, the food supply, that life is normal. We will show them medicine in hospitals. We will show them normal police work, just like in California.

As the months dragged on, El Safi’s conversations with informants and the Libyan leadership would take on a more frustrated tone. He eventually fled east, finding refuge in Egypt, one of many former Libyan officials who have so far esacped prosecution. The NTC has asked Egypt to return him, though some former members of the council suggest those efforts have been half-hearted.

“I honestly believe that… certain members of the existing National Transitional Council don’t want these people to stand trial,” Jalal al-Galal, a former spokesman for the NTC, told Al Jazeera. “Because they might implicate some members who are in the NTC.” 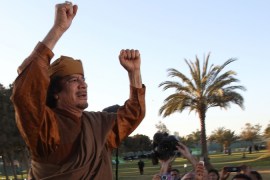 Gaddafi clung to a fading reality

As the uprising spread, the Libyan leader still banked on popular support, and wondered why his allies were defecting. 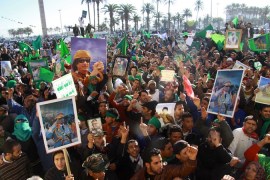 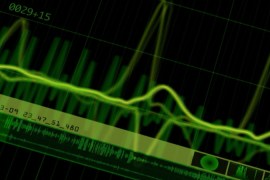 Libya on the Line: An interactive timeline

Browse through a collection of conversations between Gaddafi, Saif al-Islam and other senior Libyan officials.