Viktor Bout, the Russian arms dealer who was once dubbed the “Merchant of Death”, has been handed the minimum possible sentence of 25 years in prison by a New York judge after being convicted on terrorism charges.

Bout’s sentencing on Thursday marked the culmination of a sting operation, carried out by the US Drug Enforcement Administration (DEA) in Thailand in 2008, in which US informers posed as potential arms buyers for Colombia’s FARC rebels.

Bout, 45, was arrested in Bangkok in 2008 and subsequently extradited to New York where he was convicted last year.

Prosecutors had called for him to be jailed for life, portraying the former Soviet army officer as one of the world’s most notorious and unscrupulous arms dealers.

The defence countered that Bout was a political prisoner and the victim of a sting operation that made it seem as if he hated the US and was willing to sell surface-to-air missiles to shoot down US helicopters.

In sentencing, District Judge Shira Scheindlin said the minimum sentence was appropriate because there was no evidence that Bout would have committed the crimes for which he was convicted had it not been for the sting operation.

“But for the approach made through this determined sting operation, there is no reason to believe Bout would ever have committed the charged crimes,” she said.

Russia’s foreign ministry rejected Bout’s sentence in a statement on Friday, saying that the charges amounted to “a political order”.

“The foreign ministry considers the verdict as baseless and driven by an agenda. The whole prosecution was based exclusively on alleged criminal intent.” it said.

It said that a US media campaign had hounded Bout in order to “influence the jury and the process in general in order to direct it in only one direction”.

The ministry said that bringing Bout back to Russia would “remain one of our priorities” in its relations with the US.

Bout told the judge he was “not guilty” and said allegations against him were false. His lawyer said he planned to appeal the conviction.

When a prosecutor said in court on Thursday that Bout had agreed to sell weapons to kill Americans, Bout shouted, “It’s a lie!” He told the judge he “never intended to kill anyone” and said, “God knows this truth.”

Two DEA informants who posed as FARC leaders testified for the prosecution at Bout’s trial. A former Bout business associate, Andrew Smulian, also testified for the government after pleading guilty to participating in the FARC deal.

According to prosecutors, in a meeting at a Bangkok hotel with the supposed FARC representatives, Bout agreed to sell the 100 advanced man-portable surface-to-air missiles or the approximately 5,000 AK-47 assault rifles that were discussed.

Bout was charged only in connection with the suspected arms deal, but US authorities say he has been involved in trafficking arms since the 1990s to dictators and conflict zones in Africa, South America and the Middle East.

Prosecutors said the informants told Bout the weapons would be used to attack US pilots assisting the Colombian government. At the meeting in Bangkok, Bout responded, “We have the same enemy.”

Washington classifies FARC, a Marxist-inspired guerrilla army, as a terrorist organisation and says it is deeply involved in the cocaine trade. 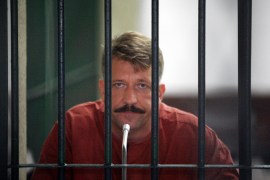 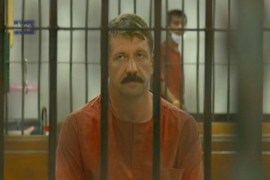