Voting is under way in by-elections in Myanmar seen as a key test of the military-backed civilian government’s budding reforms, and which could see prominent opposition leader Aung San Suu Kyi enter parliament.

More than six million people were eligible to vote on Sunday, with a total of 160 candidates from 17 parties, including six new to the political stage, contesting for 45 parliamentary seats.

But the number of seats at stake is not enough to threaten the military-backed ruling party’s overwhelming majority, secured in full elections in 2010.

The results are expected within about one week, according to election officials.

Suu Kyi is running in the constituency of Kawhmu, south of Yangon, and is widely expected to win a seat in a parliament, despite complaints from her National League for Democracy over alleged voting irregularities and campaign intimidation.

She said she did not regret standing for parliament because the polls had boosted people’s interest in politics after decades of outright military rule ended last year.

The government has for the first time invited teams of foreign observers from the Association of Southeast Asian Nations [ASEAN], European Union and the US, and journalists to witness the elections.

Al Jazeera’s Wayne Hay, reporting from Kawhmu in Myanmar, said: “There are international monitors on the ground, but they are not allowed inside the polling booths. They are certainly not allowed to oversee the counting when that starts later on Sunday.”

“So, they are here to observe overall process, talk to voters about any irregularities that they might have seen,” he said.

“So, not the best of starts, but certainly something the National League for Democracy and Suu Kyi were expecting.”

Nyan Win, a spokesman for the party, told the AFP news agency on Sunday that his party had submitted a letter of complaint to the country’s election commission regarding alleged irregularities involving ballot papers that could potentially be invalidated without due cause.

“We have done a lot of preparation for April 1. We have polling station representatives and people to provide information, because we want to know what’s going on,” Phyu Phyu Thin, a local NLD candidate, told the AFP news agency.

“The result will match people’s desires. The NLD must win.”

Suu Kyi, who spent most of the past 22 years as a political prisoner, described the vote as “a step towards step one in democracy”. despite complaining on Friday that the polls were not “genuinely free and fair”.

“What has been happening in this country is really beyond what is acceptable for a democratic election. Still, we are determined to go forward because we think that is what our people want,” the Nobel peace laureate said. 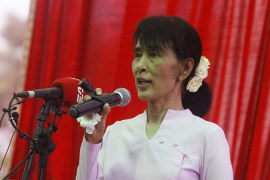 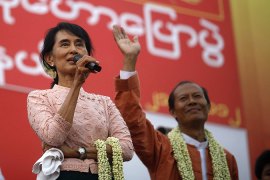 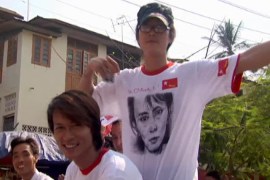 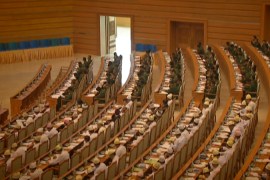 Myanmar’s third election in 50 years could have large political and economic impacts amid national changes.