Hundreds of critically endangered orangutans in western Indonesia could be wiped out “within weeks” if palm oil companies continue to set land-clearing fires in their peat swamp forests, conservationists say.

Ian Singleton, a conservation director of the Sumatran Orangutan Conservation Program, said on Thursday that the population of great apes was “just barely hanging on”.

“It is no longer several years away, but just a few months or even weeks before this iconic creature disappears,” Singleton said.

The population of Sumatran orangutans, who live in the Tripa forest on the coast of Aceh province, have decreased from about 3,000 in the 1990s to only about 200.

The forest is the most dense population of Sumatran orangutans in the world, with eight individuals per each square kilometre.

Although the forest is officially protected, almost half of the trees, that half a century ago blanketed almost three-quarters of Indonesia in plush tropical rain forest, have been cleared in the rush to supply the world with pulp, paper and, more recently, palm oil – used to make everything from lipstick and soap to “clean-burning” fuel.

Singleton said that fires had sent orangutans fleeing, while some risked being captured or killed by residents.

Others orangutans would simply die, either directly in the fires, or of gradual starvation and malnutrition as their food resources disappear, he said.

“We are currently watching a global tragedy,” said Singleton.

Cloud-free images from December show only 12,267 hectares of Tripa’s original 60,000 hectares (148,260 acres) of forest remains, said Graham Usher of the Foundation of a Sustainable Ecosystem.

The rest has been broken up and degraded as palm oil companies drain the swamp, said Singleton.

He said that a total of 92 fire hot spots were recorded between March 19 and 25 in several of the surrounding plantations. 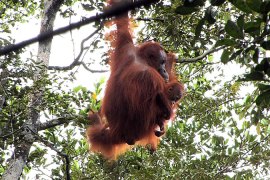 Green: Death of the Forests

A visual essay about the impact of deforestation in Indonesia as seen through the eyes of a dying orangutan. 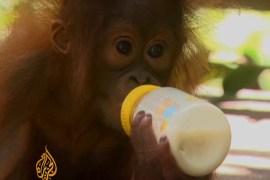 World’s rainforests in danger and their animal inhabitants may suffer the most, summit says. 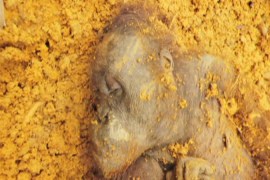 Palm oil companies are suspected of killing the endangered animals to preserve their plantations. 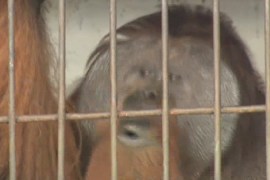 Efforts to return the animal to the wild in Borneo thwarted by loss of nearly 80 per cent of its natural habitat.