The bulk of Monday’s casualties came in an attack outside the gates of the US-led airbase where copies of the Quran were burned, with at least five Afghans killed, according to officials.

The target of the bombing was a vehicle belonging to the International Security Assistance Force (ISAF) near the Bagram base, in the northern province of Parwan.

“A suicide attacker came out of a truck and blew up his vest outside Bagram airfield [at a gate used by supply vehicles],”  Abdul Basir Salangi, Parwan governor, told the AFP news agency.

Kabir Ahmad Rahil, the chief of Bagram district, said there could be foreign casualties.

Captian Justin Brockhoff, a NATO spokesman, said there were no reports of coalition fatalities, and the base itself was not breached by the explosion.

“Coalition officials are gathering details at this time, and more information may be released as appropriate,” he said.

Rahil said the attacker was on foot when he blew himself up next to a vehicle in a small NATO convoy near the airbase.

At least four more civilians were wounded in the attack.

In a text message to the media, Zabiullah Mujahid, a purported Taliban spokesman, claimed the attack was “in retaliation for the Quran burning”, an incident that sent thousands of Afghans into the streets two weeks ago.

On one of their two official Twitter accounts, the Taliban confirmed the attack was “in revenge for the desecration of the Muslim holy book and other religious books by the Americans in the base”.

The group, known to exaggerate casualty figures, claimed 12 “invaders” were killed in the Bagram attack by a resident of the eastern province of Logar.

The demonstrations following reports of burnt Quran copies at the Bagram airbase, which the US said were unintentional, led to protests in several of the nation’s 34 provinces and killed at least 30, including American soldiers shot by their Afghan colleagues.

Earlier on Monday, a suicide blast in Jalalabad, in Nangarghar province, killed a member of the Afghan security forces and left another 12, including eight civilians, wounded.

“Unfortunately, up to now 12 people were wounded and one martyred, he said, referring to the Afghan soldier.

No groups have as yet taken credit for the blast. 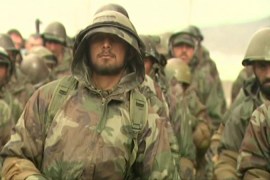 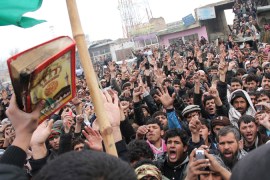 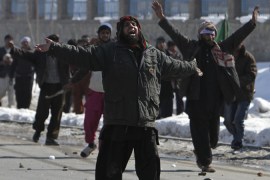 At least 11 protesters killed on fourth day of widespread protests against burning of Quran at US airbase.