At least 35 Yemeni soldiers have been killed in the south of the country in clashes with fighters linked to al-Qaeda, medics and officials said.

Medics at a military hospital in the southern port city of Aden said on Sunday dozens were also wounded and the number of casualties was likely to rise as a result of the fighting.

Military officials said the clashes erupted after the fighters tried to overrun an army post in Kud, south of Zinjibar, Abyan’s provincial capital where the army has been battling Islamists since May.

A local official in Jaar, a nearby Islamist stronghold, said 12 fighters died in the fighting.

It was the latest in a spate of attacks against security forces since President Abdrabuh Mansur Hadi took over from former president Ali Abdullah Saleh on February 25 under a Gulf Cooperation Council brokered transition accord.

Zinjibar has mostly come under the control of the fighters since May last year when protests were raging across the country against Saleh’s 33-year rule.

On the day Hadi was sworn in, vowing to carry on Saleh’s fight against the network, a suicide bomber blew up his vehicle outside a presidential palace in the southeastern province of Hadramawt killing 26 soldiers.

Separately on Sunday, Abdullah Idris, the head of Saleh’s General People’s Congress party branch in Rada, a town southeast of Sanaa, was “seriously” wounded when his car exploded, a military official said. 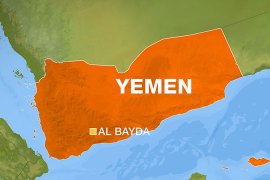 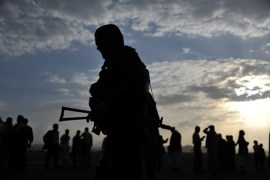 Military outposts in Zinjibar targeted by suspected al-Qaeda-linked fighters in the latest of a string of attacks.