Candidates for Iran’s parliamentary election are wrapping up their week-long campaigning before the March 2 vote.

The election on Friday for the 290-seat Islamic Consultative Assembly is the first since the disputed presidential poll in 2009, which ignited eight months of protest against both President Mahmoud Ahmadinejad’s victory and the government.

The state carried out deadly crackdowns on the opposition demonstrations, many of whose leaders remain under de-facto house arrest.

With the virtual absence of the reformist coalition from the race, analysts believe the election has turned into a contest between factions within the increasingly divided conservatives.

“The elections are significant because they are a test for the government, that is to say, the Supreme Leader [Ayatollah Ali Khamenei] and Ahmadinejad, to see whether they have the backing of the majority of the Iranian people after the troubles and crackdown that happened two-and-a-half years ago,” Sadegh Zibakalam, a professor of political science in Tehran University, told Al Jazeera.

“It is actually a bitter contest between Ahmadinejad on the one hand, and the more conservative hardliners – the principlists.”

Voter turnout will be closely watched, as it is considered an important indicator of how much of the country backs the conservatives, who dominated the outgoing assembly.

“In a sense it is also important for the opposition because a huge turnout would mean the people are not really supporting the opposition, namely the reformists,” Zibakalam said.

A high turnout could also provide a boost for a government under tremendous pressure, both domestically and internationally. Unemployment remains high, and international sanctions over the country’s nuclear programme has further increased economic pressure.

In the lead up to the vote, Khamenei has repeatedly stressed the importance of a high turnout to counter conspiracies from the “enemy”, a term usually reserved for the US and Israel, but expanded in its scope recently.

“The enemy’s propaganda machines and the media of arrogant circles have begun an extensive effort so that the assembly election is without splendour,” the 72-year-old said.

“But all should know that the people’s participation in the elections will take the country forward … an election full of excitement will be a major blow to the enemy.”

The vote is also considered an important gauge for Ahmadinejad’s supporters before the country’s next presidential elections.

While the president cannot run for a third conservative term, how his circle fares in the elections will offer a clue as to whether one of his allies could claim the office in the next vote and possibly leave a door open for Ahmadinejad to return for a third term after a gap.

“If Ahmadinejad supporters can win a substantial number of seats in this election it would mean it would be very difficult for the Supreme Leader to say that this is the end of Ahmadinejad,” Zibakalam said.

“If they do get a large number of seats, then someone within Ahmadinejad’s camp would be running for [the presidential] elections in two years time.” 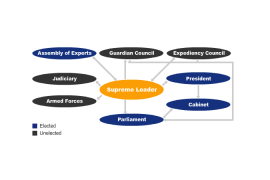 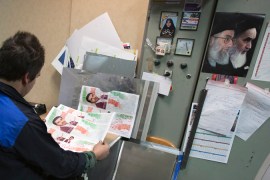 Virtual absence of the reformists pits increasingly divided conservatives against each other in assembly elections. 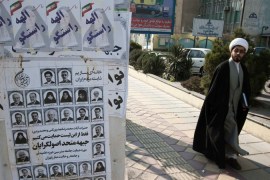 Iran ‘intensifying clampdown’ ahead of vote