Hundreds of protesters have clashed with police and security forces in Afghanistan in a second day of angry demonstrations over reports that copies of the Quran were burnt at an airbase used by NATO and coalition troops.

An Afghan government source told Al Jazeera that seven people have been killed during Wednesday’s protests and 32 have been wounded, but no exact location was given.

In Kabul, the capital, several people were reported wounded as demonstrators blocked a major highway outside Camp Phoenix, a US base in the city. Police said protesters threw stones, smashed car windows and charged at police lines.

But a police spokesman denied that police officers had shot at protesters.

“People are marching towards Kabul. Police are trying to stop them. We have sent more reinforcements to the area,” the spokesman said.

A second protest erupted in west Kabul, involving about 100 university students, a police spokesman said, adding that riot police were present and the demonstration was under control.

According to AFP, one person was killed and 10 were wounded when shots were fired at anti-US demonstrators in the eastern Afghan city of Jalalabad. Protesters there praised the leader of the Afghan Taliban, shouting “Long live Mullah Omar!”, Reuters reported.

The US embassy said on Wednesday it was locked down and had suspended all travel in Afghanistan.

The protests, which followed reports of the discovery by local labourers of charred copies of the Quran as they collected rubbish at the Bagram airbase, prompted apologies from the US government and the commander of NATO-led forces in Afghanistan.

Leon Panetta, the US defence secretary, issued an apology for the “inappropriate treatment” of Islam’s holy book at the base and backed General John Allen’s call for “swift and decisive action to investigate this matter”.

Al Jazeera’s Bernard Smith reporting from Herat said: “These protests that began outside the Bagram base on Tuesday, have now seemed to have spread to other cities across Afghanistan.”

Hundreds of protesters besieged Bagram, about 60km north of Kabul, on Tuesday, firing slingshots and petrol bombs at the gate of the base.

Reports suggest US personnel had confiscated materials that they suspected Taliban prisoners were using to send messages. 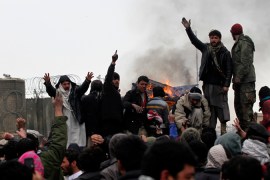 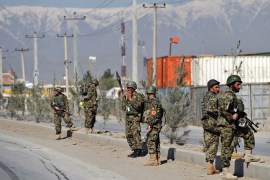 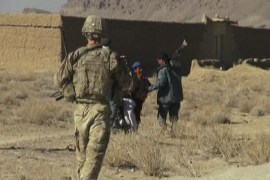 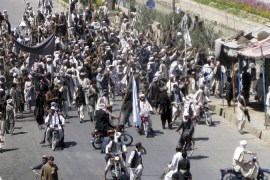