Syrian troops have attacked the southern city of Deraa, bordering Jordan, in the latest escalation in its violent crackdown on an anti-government uprising, according to activists.

The attack came as the United Nations General Assembly was due to vote later on Thursday on a new resolution condemning Syrian President Bashar al-Assad’s government after the UN Security Council failed to reach agreement earlier this month due to Russian and Chinese opposition.

Ban Ki-moon, the UN general-secretary, said on Thursday that crimes against humanity had probably been committed by Syrian forces, echoing concerns of Navi Pillay, the organisation’s human rights chief, who has called for the situation in Syria to be referred to the International Criminal Court.

“We see neighbourhoods shelled indiscriminately, hospitals used as torture centres, children as young as 10 years old killed and abused. We see almost a certain crimes against humanity,” Ban said during a visit to Austria.

Thursday’s resolution at the UN General Assembly is proposed by Arab states including Qatar, Egypt and Saudi Arabia as well as Western powers which have expressed support for protesters in Syria, including the US, the UK and France.

It calls for the assembly to express grave concern at the deterioration of the situation in Syria, and to back an Arab League peace initiative which calls for “a Syrian-led political transition to a democratic political system”.

In Deraa, the sound of explosions and machinegun fire echoed through districts under attack by government troops, the Reuters news agency quoted residents as saying.

“The army bombardment started around dawn and after that exchanges of fire occurred,” Hussam Izzedine, a member of the Syrian human rights organisation Sawasiah, told Reuters from Deraa.

“Deraa has been regaining its role in the uprising. Demonstrations have resumed and the Free Syrian Army has been
providing security for protests in some parts of the city.”

The attack in the city follows continued bombardments and tank shelling in the cities of Hama and Homs, in an apparent drive to crush the 11-month uprising against Assad’s rule.

Artillery shelled parts of Homs on Wednesday for the 13th day in a row. The Local Co-ordination Committees, an activist group, said at least four people were killed by army fire concentrated on Bab Amr district, an opposition stronghold.

Al Jazeera’s Rula Amin, reporting from neghbouring Beirut, said: “Syrian government forces seem to be on the offensive, pushing back into areas where Free Syrian Amry [FSA] had taken control in the past few weeks.”

“They have been conducting severe seizures and bombardments in many areas in the country: Hama, Homs and suburbs of Damascus, and this morning in Deraa in the south,” she said.

“The FSA has been pushing back as the government forces try to re-control, especially old town of Deraa,” the Al Jazeera correspondent said.

“We are hearing about lot of gunfire and bombardment by the security forces, and it is very hard to verify how many people have been killed or injured because people say most communications are down.

“It is obvious government seems determined, as they want to take control of all the areas they lost in the past few months.”

An army offensive last April put down large demonstrations in Deraa, which had been provoked by the arrest of several women activists and the detention of schoolboys.

Meanwhile on Thursday, the Syrian National Council (SNC), re-elected Burhan Ghalioun as president of the bloc. His mandate as leader of the coalition, which has become the main voice of the Syrian opposition, runs to April 15.

“The SNC renews its pledge to fulfil the demands of the Syrian people and its responsibilities towards them, and to ensure that none of the bloodshed has been in vain,” the SNC Executive Committee said in a statement after meeting in Doha, Qatar.

China, which drew global condemnation when it joined Russia in vetoing a UN Security Council resolution on Syria, said on Thursday it would send an envoy to Damascus to push for a “peaceful” end to the conflict.

Russia and China have so far refused to bend to diplomatic pressure over Syria, but France said on Wednesday it was negotiating a new UN Security Council resolution with Russia, which would include the creation of humanitarian corridors to ease the plight of civilians caught up in the violence. 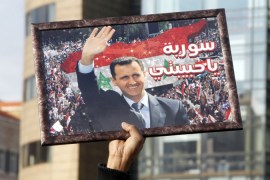 With the date for constitution referendum set, Al Jazeera looks back at the decrees passed since protests erupted. 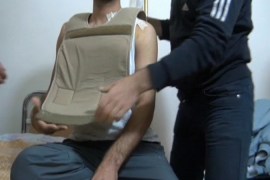 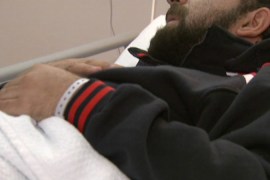 Injured activists seeking medical aid in Lebanon for fear of reprisals if treated back home.