Tuareg rebels have seized a northeastern border town in Mali as the UN urged an end to the fighting.

“We took Tinzawaten on Wednesday,” said Mohamed Ag Ghaly, a Tuareg rebel fighter, referring to an area near the Algerian border.

“Our troops are occupying the town,” he told the AFP news agency by telephone. “We will give details about deaths and prisoners later.”

A Malian official confirmed the rebel claim, saying: “We asked our troops as a strategic measure to abandon their positions in Tinzawaten.” He said “there were no deaths and no fighting”.

“One of our current strategies is to abandon isolated positions,” the official told the AFP, speaking on condition of anonymity.

While German on Wednesday said it was giving an additional 12 million euros in food aid for the Sahel region, including Mali, UN Secretary-General Ban Ki-moon was “deeply concerned” over civilian casualties and the humanitarian impact of the conflict.

Ban called on the rebel groups “to immediately cease their attacks and to engage in dialogue with the government of Mali to resolve their grievances.” He offered UN support for efforts to find a peaceful solution.

More than 20,000 people have fled from northern Mali into neighbouring Burkina Faso, Algeria and Mauritania, according to the UN.

The International Committee for the Red Cross said the number of Malians displaced within the country had risen to 30,000, and a further 15,000 had crossed into Niger.

Mauritanian aid officials have said at least 5,000 Malians have crossed westwards over the shared border. Burkina Faso, Mali’s southern neighbour, said it had welcomed over 8,000 refugees from the conflict.

The Azawad National Liberation Movement (MNLA) and other Tuareg rebels — boosted by the return of men who fought in Libya for slain leader Muammer Gaddafi — are demanding greater autonomy.

Both the army and rebels are believed to have suffered severe losses as the Tuaregs make a push to take towns in northern Mali.

A nomadic community of some 1.5 million people, Tuareg of various tribes are scattered between Algeria, Burkina Faso, Libya, Niger and Mali.

Mali and Niger experienced uprisings as the Tuareg fought for recognition of their identity and an independent state in the 1960s, 1990s and early 2000 with a resurgence between 2006 and 2009. 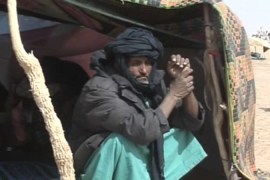 Concerns over access to basic essentials after more than 22,000 people flee continued fighting in Mali.