Kamal el-Ganzouri, Egypt’s military-backed prime minister, has said Egypt will not bow to Western pressure to end its crackdown on foreign-funded non-governmental organisations in the country.

Egypt “won’t back down or take a different route because of some aid or other”, he announced from the cabinet’s headquarters in Cairo on Wednesday.

Ganzouri said Western countries “turned against us” after the crackdown against the NGOs began.

US politicians have said that Egypt’s investigation into pro-democracy and human rights groups, many of them at least partially US funded, endangers the roughly $2 billion it receives in aid every year.

Nineteen Americans who work for those NGOs were indicted by judicial prosecutors earlier this week. At least six of them are currently in Egypt and banned from leaving the country. Fourteen Egyptians and 10 other foreign nationals were also indicted.

The government opened an investigation into numerous pro-democracy and human rights groups in early 2011, following the revolution against President Hosni Mubarak, and escalated its efforts in December, raiding 17 NGO offices and seizing money and equipment.

The charges, which carry sentences up to five years, include operating without a license and illegally receiving foreign funds.

As Ganzouri gave his remarks, the two judges who are investigating the case presented their results in a separate press conference.

The judges said they had seized 67 pieces of evidence, including maps, cash and videos taken of churches and military facilities. They accused the NGO workers of asking inappropriate survey questions, such as the religion of respondents and what kind of clothes they wear.

“Cash in millions was seized along with bank drafts, cheques, counterfoils and ATM cards. Their activities include training of political parties, rallying for certain candidates, and soliciting votes”, said Sameh Abouzeid, one of the judges.

He said some of the groups had been acting without permission to do so and were politically motivated.

He also said many of the groups violated tax laws by not registering with the Egyptian Tax Office, therefore failing to pay taxes for their activities and staff.

The comments echoed allegations repeatedly made by Egypt’s ruling military council that “foreign hands” are plotting unrest in Egypt.

Among the Americans referred to court is the son of the US transportation secretary, Ray LaHood.

No solution in sight

The investigation has continued to escalate despite a corresponding effort by the United States to defuse it.

That effort has included a visit to Cairo from the top US Middle East diplomat, a letter to the investigating judges from the ambassador to Egypt, a personal phone call from President Barack Obama to Field Marshal Hussein Tantawi, the head of the ruling military council, and a well-publicised uproar among a bipartisan cast of congress members.

None of those attempts at persuasion have worked, as the Egyptian government has moved from office raids to travel bans to indictments.

General Martin Dempsey, the United States’ top-ranking military officer, is set to visit Egypt this week, and the NGO workers’ case will almost assuredly be discussed. 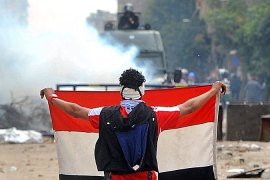 Are NGOs fanning unrest in Egypt?

As rights groups come under scrutiny over foreign funding, we ask if the ruling military is hunting for a scapegoat. 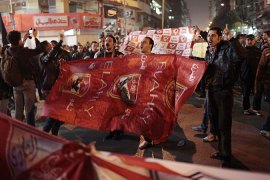 Professional football season is suspended, but some fear the halt may do more harm than good. 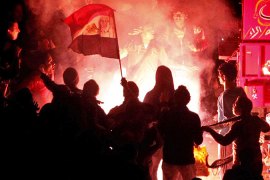 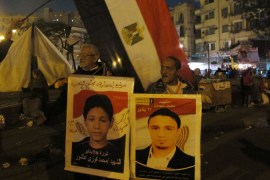