Pro-Europe politician Sauli Niinisto has won Finland’s presidency in an election that showed voters want to keep the country in the euro zone despite misgivings over European Union bailouts.

The two had beaten anti-euro candidates, Paavo Vayrynen of the Centre party and Timo Soini of the Finns Party, in an earlier round last month.

The weak showing by the eurosceptics was a relief for Prime Minister Jyrki Katainen, who like Niinisto is a member of the National Coalition party which supports conservative economic policy.

Analysts said worries about Europe’s debt crisis, which could drag Finland’s export-dependent economy into recession, may have persuaded voters to choose a steady and pragmatic pair of hands.

“In tough times people want to believe that somebody is in control of the economy,” said University of Helsinki professor Tuomo Martikainen.

Niinisto said Finland was and would remain supportive of European monetary union but that he understood Finnish voters’ frustration over the debt crisis.

“The Finnish people have full right to be critical, but at the same time I would like to say that Finland has shown more solidarity than anybody else,” he said.

Niinisto is credited with leading the small Nordic economy towards growth following the collapse of the Soviet Union during his tenure as finance minister from 1996 to 2001.

He is also supportive of tough fiscal reforms that Katainen is pushing in order to plug its deficit and make sure it retains its triple-A debt rating.

“I voted for Niinisto because I think in the current economic situation we need a president who has that kind of expertise,” Katri, a 23-year-old student, said.

Some analysts had expected a stronger showing by anti-euro candidates, particularly Soini, whose Finns Party made strong gains in parliamentary elections last April and is now the biggest opposition group.

Niinisto and Haavisto may have also benefited from a backlash against eurosceptic politicians after some Finns Party candidates made highly publicised racist and homophobic remarks.

While Haavisto, the first openly gay presidential candidate, conceded with 37 percent, his success in the first round was a triumph for his party – a minor member of government with only 10 out of 200 seats in parliament.

Incumbent President Tarja Halonen was elected as the country’s first female president in 2000 and re-elected in 2006.

She steps down on March 1 having served the maximum 12 years. 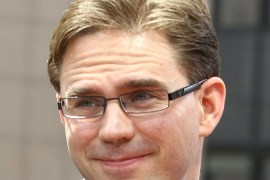 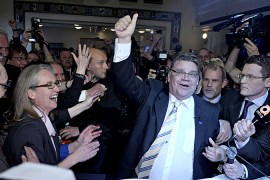 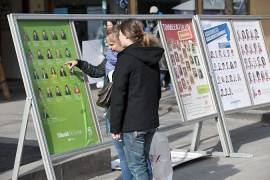 The anti-euro True Finns party is expected to reel off big gains in Finland’s general election on Sunday.