Pakistan’s top court has summoned Yousuf Raza Gilani, the prime minister, to appear later this month for the framing of contempt charges over his refusal to pursue corruption cases against the country’s president.

Gilani responded to Thursday’s ruling by saying he would appear before the court.

“I will appear in the supreme court. I have attended the court when summoned in the past and I will attend again now,” he told Pakistan’s parliament.

The court’s decision followed an attempt by Gilani’s lawyer, Aitzaz Ahsan, to avoid the charge in a hearing before the judges last month.

Speaking on Thursday outside the supreme court in Islamabad, Ahsan said: “The court has decided to frame charges against … Gilani. He has been asked to be present in person on February 13 when he will be indicted.

“There is a possibility for an appeal in this matter. It is up to the court whether to suspend this order or not. This will be decided after getting a copy  of the order.”

Judge Nasir-ul-Mulk told the supreme court there were grounds to proceed against Gilani, despite the government’s insistence that Asif Ali Zardari, the Pakistan president, has immunity from prosecution while he is head of state.

“After the preliminary hearing, we are satisfied that prima facie there is a case for further proceeding into the matter.”

“Adjourned for February 13, for framing charges. Prime minister is required to remain present in the court,” Mulk said, reading out the order in English.

No comments on judiciary

In his response to the ruling, Gilani said he would “refrain from making comments” on the judiciary. He said he firmly believed that “everybody should follow the constitution”

Gilani went before the court on January 19, to explain his refusal to ask Switzerland to re-open graft cases against Zardari on the grounds of the head of state’s immunity.

He defended himself against contempt charges and refused to back down in a case that could put him in prison for up to six months and see him disqualified from office if convicted.

Sheik Usmani, retired justice of the supreme court, said that a conviction would not be inconceivable, even for a person with “the stature of the prime minister”.

Ahsan said he would advise Gilani to appeal before 13 January, something that could draw out the proceedings further.

A defendant has the right to appeal in a contempt case in Pakistan even before a trial begins, but Gilani’s lawyer expressed concern about the possible civil turmoil that such a prominent case might produce.

“I am concerned about tension and confrontation between the civilian institutions,” Ahsan said, noting that now the situation was looking “tense”.

Government supporters say the court is trying to remove Zardari because of enmity between Zardari and the chief justice.

The court has also ordered an inquiry into a secret memo scandal that is also threatening Zardari.

The memo was allegedly sent to Washington DC by the government last year asking for help in stopping a supposed military coup.

The government has denied the allegations, and the case appeared to lose steam last week when the main witness refused to come to Pakistan to testify.

It is only the second time that Pakistan’s highest court has pursued contempt proceedings against a sitting prime minister, plunging the weak government deeper into a crisis that could force early elections within months. 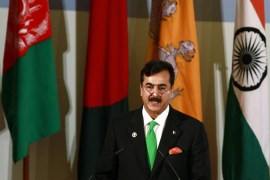 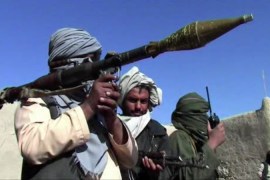 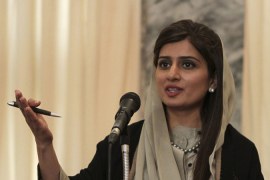 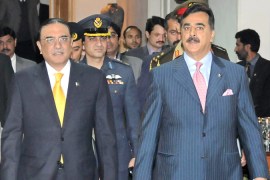 Move comes as PM Gilani appears before supreme court in contempt hearing for not pursuing fraud case against president.