Egypt has deployed troops in the northern city of Port Said after stadium clashes between fans after a football match left at least 74 people dead and hundreds more injured.

“Egypt’s army has deployed troops in Port Said to prevent further clashes between fans of [football teams] al-Ahly and al-Masry,” state television reported on Wednesday, adding that the military had also secured the road out of the city.

The health ministry said in a statement that a policeman was among the 74 dead. Hundreds were injured, it said. At least two players suffered light injuries.

Forty-seven people have been arrested in connection with the violent pitch invasion, the country’s interior minister said.

Mohamed Ibrahim said many of the victims had died in a crush of people at the stadium. He told state television the search for suspects linked to the incident was continuing.

The head of the ruling military council, Field Marshal Mohamed Hussein Tantawi, pledged to track down those behind the violence in a rare phone call to an Egyptian TV channel.

“These kind of events can happen anywhere in the world but we will not let those behind this get away,” Tantawi said, speaking to a sports television channel owned by the al-Ahly club. He said victims would receive compensation after their cases were examined.

“We will get through this stage. Egypt will be stable. We have a roadmap to transfer power to elected civilians. If anyone is plotting instability in Egypt they will not succeed. Everyone will get what they deserve,” he said, adding that securing the game was the responsibility of the police force.

State television said parliament would hold an emergency session over the violence.

Activists scheduled rallies on Thursday outside the headquarters of the interior ministry in Cairo to protest the inability of the police to stop the bloodshed.

Many gathered outside al-Ahly club in Cairo, chanting slogans against military rule, and hundreds filed into Cairo’s main train station to receive the injured arriving from Port Said. “We die like them, or we ensure their rights,” the crowd chanted, along with slogans denouncing the military rulers.

As the train arrived, scores jumped on top of the train and raised Egyptian flags.

In Port Said, residents marched early on Thursday, denouncing the violence and saying it was a conspiracy by the military and police to cause chaos.

Army tanks and armoured vehicles joined police patrolling near hospitals and morgues. Police were not to be seen in the streets after the violence and were unavailable to break up fights that followed.

The tension also spread to the nearby Suez province. About 500 protesters, including football fans and activists, gathered outside the main police headquarters to protest what they called police negligence.

A security official said the police fired tear gas to disperse the crowd.

A security official said the fans chased al-Ahly players and cornered their supporters on the field and around the stadium,
throwing stones and bottles at them.

“This is unfortunate and deeply saddening. It is the biggest disaster in Egypt’s soccer history,” said Hesham Sheiha, deputy health minister. He said most of the injuries were caused by concussion and deep cuts.

Al-Ahly players were trapped in the changing room along with supporters. Riot police were sent in to drive the rival crowds of fans back.

Al-Ahly’s supporter club, known as the Ultras, said on their website that they would head to Port Said later in the evening.

Sepp Blatter, the head of football world governing body FIFA, said he was “very shocked and saddened” by the incident.

“This is a black day for football,” he said in a statement. “Such a catastrophic situation is unimaginable and should not happen.”

Al-Masry’s 3-1 win was a rare victory over al-Ahly, one of the biggest clubs in Egypt. The two teams have a long history of bad blood, and clashes have erupted in recent years between their fans.

But our correspondent said the issue went beyond the pitch, with Egypt experiencing a “security vacuum” after the revolution which overthrew Mubarak.

The Egyptian premier league, which the games were part of, was suspended indefinitely. 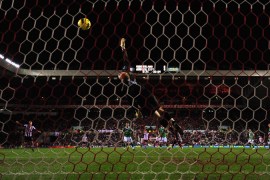 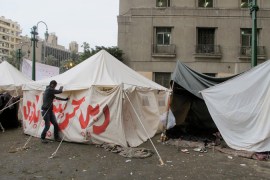 Group of ardent football fans have swapped the stadium for the protest lines, often spearheading clashes with police. 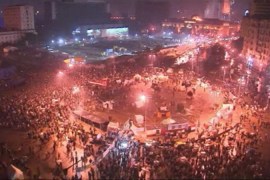