Senegal’s highest court has confirmed its approval of incumbent President Abdoulaye Wade’s bid to seek a third term in next month’s election, as opposition leaders vowed to continue “national resistance”.

The Constitutional Council, appointed by 85-year-old Wade and known as the “five wise men”, late on Sunday confirmed its ruling from Friday that declared the president’s candidacy valid.

The court said a series of appeals against its ruling were “unfounded”, also rejecting Wade’s own challenge against the inclusion of three other opposition candidates.

The top court also turned down an appeal by music icon Youssou N’Dour against its rejection of his candidacy on the basis that he had not provided enough supporting signatures.

Meanwhile,  Senegal’s opposition rallied the nation to a fresh protest on Tuesday to force President Wade to scrap his candidacy for a controversial third term which has already sparked deadly riots.

Two people, including a 60-year-old woman and 17-year-old were shot dead by police during clashes between protesters and security forces during an opposition demonstration in the northern Senegalese town of Podor on Monday.

The June 23 Movement (M23) of opposition and civil society groups against Wade’s election bid on Monday called for “a peaceful gathering … to demand Wade withdraws his candidacy” for Tuesday afternoon.

Clashes had earlier broken out in the capital, Dakar, on Friday when the constitutional court first approved Wade’s re-election bid.

A policeman was killed in the turmoil as angry youths, engaged in a pitched battle with the police, torched cars and shops, erected barricades and burned tyres in Dakar’s main roads.

Calm returned to the capital Dakar over the weekend, but police in full riot gear have been deployed around the presidential palace, armed with tear gas, grenade launchers and truncheons.

Opposition parties have vowed to continue “national resistance” against Wade’s bid, calling the council’s decision a “constitutional coup”. They argue that the constitution allows a president to serve only two consecutive terms.

However, Wade, who came to power in 2000 and was re-elected in 2007, says the applicable law, amended in 2008, does not apply retroactively and cannot take into account his previous two terms.

The opposition, united under the June 23 Movement (M23), warned on Sunday that “the time for talking is over” as it called for mass resistance and a rally in the coming days.

“This is an appeal, a solemn, strong and resolute appeal to engage in resistance. We are ready for all sacrifices,” Amadou Gueye, one of the movement’s leaders, said.

The country’s top politicians, who will be rivals in the February 26 polls, are presenting a united front under the M23 banner in a bid to ensure Wade does not take part.

“Our main concern is not the election right now, it is standing alongside our people,” said former foreign minister and presidential candidate Cheikh Tidiane Gadio.

Meanwhile, a local body of online news websites (Appel) said in a statement on Sunday that 80 per cent of Senegal’s web news providers experienced technical difficulties since Friday night.

It suspected “attacks against the sites’ host servers to prevent the closely-watched online media from relaying news on the current tense situation”.

On Sunday, UN Secretary General Ban Ki-moon, speaking at an African Union summit in Ethiopia, called on the continent’s leaders to respect democracy, though he did not specifically mention Senegal.

Senegal is the only country in mainland West Africa not to have had a coup since the end of the colonial era. February’s poll, and a possible run-off a few weeks later, are seen as a test of social cohesion in the predominantly Muslim country. 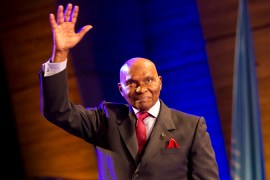 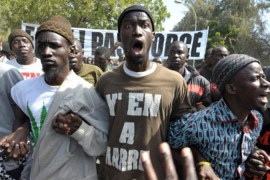 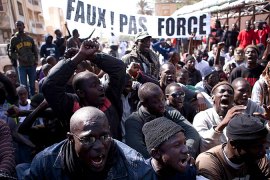 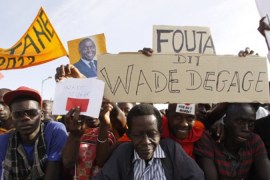