The captain of a cruise ship that hit a reef off the coast of Italy has been detained on suspicion of manslaughter after at least three people were found dead as a result of the accident.

Many more people were still missing on Sunday morning, but rescue crews managed to evacuate to safety two more survivors who had been trapped inside the massive Costa Concordia ship, which ran aground off the Italian coast late on Friday.

The survivors, a South Korean couple who were on their honeymoon, were discovered on the ship’s lower deck during a nighttime rescue operation.

The 114,500-tonne Costa Concordia was on a trip around the Mediterranean when it “hit an obstacle” near the island of Giglio off the coast of Tuscany. More than 4,000 people were aboard the luxury ship.

The vessel was taking in water through a 50m hole in its hull on Saturday, and the condition of the vessel appeared to be worsening.

“The ship is a pretty formidable sight, to say the least, and you can clearly see the enormous gash as rescue operations are still taking place,” Al Jazeera’s Sonia Gallego reported from a firefighting boat nearby on Saturday.

“Divers have now gone in and are searching the ship, at a particuarly dangerous time as the tide goes up.”

Authorities said they had launched an investigation into the cause of the accident.

“At around 8:00pm (19:00 GMT) the 290-metre-long Costa Concordia cruise ship … began taking on water and tilting over by around 20 degrees,” the coast guard said in a statement, after most of those aboard were rescued with lifeboats.

“There are three certified dead,” Guiseppe Linardi, the top official in Grossetto told Italian media, saying that difficulties in mounting the passenger rescue effort had led to earlier confusion over the death toll.

Authorities fear the casualty figure could rise beyond the two French tourists and Peruvian crew member who were confirmed to be dead.

One of the victims was a man in his 70s who died of a heart attack caused by the shock to his system when he jumped into the icy waters, reports said.

Dozens were also injured in the accident, at least two of them seriously.

Most of the 3,200 passengers and 1,000 crew members had already been evacuated to safety on Saturday, as the search continued to see if anyone remained trapped inside the ship.

Helicopters were being used to help rescuers, while hundreds of others were transferred by ferry to the mainland at the Santo Stefano port.

“It’s a very complex operation because some of the passengers may have jumped into the sea and not been picked up by rescuers, while others may have been sheltered in private houses and therefore not been identified yet,” Linardi, the police chief in Grosseto, said.

Some passengers heard a loud bang and were initially told the ship had shuddered to a halt for electrical reasons, before being told to put on their life-jackets, a passenger from the boat told the ANSA news agency by telephone.

“We were having supper when the lights suddenly went out. We heard a boom and a groaning noise, and all the cutlery fell on the floor,” Luciano Castro, a passenger, said.

Emily Lau, another passenger, told Al Jazeera on Saturday that people were afraid as the ship began to tilt.

She said that crew members tried to reassure the passengers, but that they had trouble handling the situation.

“When we got to the deck, people were just utterly hysterical, mostly not because something was scary, but because there was no control.

“It was just utter madness. People were falling because the ship was actually sinking quite fast. And the next thing we heard was ‘abandon ship’,” Lau said.

“We had to embark onto our lifeboats, and people were rushing onto the lifeboats and there was no order of any sort. No one told us what to do,” she added

Some passengers jumped into the sea in a hurry to get off the sinking ship, according to reports.

“It was like a scene from the Titanic,” said passenger Mara Parmegiani.

The local mayor said they were trying to find room to accommodate the rescued passengers, including pregnant women and children.

“We are trying to accommodate them anywhere we can – in schools, nurseries, hotels, anywhere that has a roof,” Sergio Ortelli, the local mayor, said,

He said some passengers were bedding down for the night in a church.

The Costa Crociera company, which owns the vessel, said that it was not yet possible to say what caused the problem, but that the evacuation had been fast.

“The ship was on a cruise in the Mediterranean, leaving from Savona with planned stops in Civitavecchia, Palermo, Cagliari, Palma, Barcelona and Marseille,” the company said.

“There were around 1,000 Italian passengers on board, as well as 500 Germans and around 160 French people.”

The cruise ship – which boasts 58 suites with balconies, five restaurants, 13 bars, five Jacuzzis and four swimming pools – had set off from the Civitavecchia port near Rome earlier on Friday when it ran into difficulties.

The ship was built in 2004-2005 at a cost of 450 million euros at the Fincantieri Sestri shipyard in Italy. 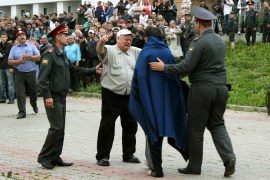 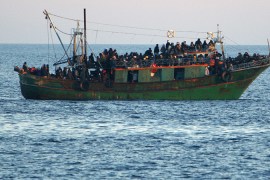 Incident comes a day after a boat laden with another such group of 600 people sank off Libyan coast.