The Standard & Poor’s ratings agency has carried out a mass downgrade of more than half of the euro zone countries.

S&P stripped France and Austria of their top AAA ratings on Friday in a move that may complicate efforts to solve a two-year old European debt crisis.

Those were just two of the nine member-states of the euro area that had ratings cut.

However, Francois Baroin, the French finance minister, said the loss of the AAA rating was not “a catastrophe” and underscored that France still had a solid AA+ rating.

“The United States, the world’s largest economy, was downgraded over the summer,” he said.

“You have to be relative, you have keep your cool. It’s necessary not to frighten the French people about it.”

Besides France and Austria, Malta, Slovakie and Slovenia suffered a one-notch downgrade while Portugal, Italy, Spain and Cyprus were cut by two notches.

“What Standard & Poor’s is saying is that the kind of measures European countries are proposing up until now simply may not be enough,” Jackie Rowland, Al Jazeera’s correspondent in Pairs, said.

A pact being negotiated to tighten budgetary discipline is not a breakthrough for the eurozone’s problems and may lead to self-defeating fiscal austerity, Standard & Poor’s.

The pact, which EU leaders agreed to negotiate at a December 9 summit, “has not produced a breakthrough of sufficient size and scope to fully address the eurozone’s financial problems,” S&P said as it announced the downgrades.

S&P had warned 15 European nations in December that they were at risk for a downgrade.

France is the second-largest contributor behind Germany to Europe’s financial rescue fund. The fund still has a rating of AAA. That means that it can borrow on the bond market at low rates.

“There’s a legitimate reason to be concerned,” he said. “A weaker France means a weaker bailout fund.”

Of the 16 countries reviewed, according to the agency, all except Germany and Slovakia have negative outlooks, meaning more downgrades are possible in the next couple of years.

It also said that while Italy’s downgrade reflects increasing vulnerabilities to external financing risks and their negative implications on economic growth, Germany’s AAA rating reflects a track record of prudent fiscal policies and spending discipline, with the ability to absorb large economic and financial shocks.

Markets in Europe and the US plummeted earlier on Friday after a European Union official disclosed Standard & Poor’s decision.

Previously, France was, along with Germany, Luxembourg and the Netherlands, among the six eurozone nations with a AAA rating.

Friday’s developments sent the euro currency spinning down to a 17-month low against the dollar.

Responding to the downgrade, the head of the Eurogroup has said in a statement that the eurozone is determined to protect the triple-A credit rating of its bailout fund.

“The shareholders of the EFSF affirm their determination to explore the options for maintaining the EFSF’s AAA rating,” Jean-Claude Juncker, Luxembourg’s prime minister, said.

France is a major contributor to the EFSF.

Europe’s crisis sprang from worries that countries had taken on more debt during boom years than they could pay back once their economies slowed. 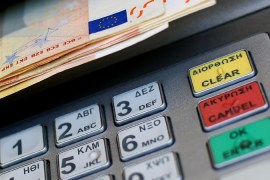 Talks between Greece and its creditor banks collapse with sides divided over interest rate Athens will end up paying.