There is a drawing on Nancy Hollander’s office wall showing her appearing before the US Supreme Court in a case labelled “Gonzales v O Centro Espirita Beneficente Uniao do Vegetal”.

She was arguing on the part of a church group that it had the right to use a banned Schedule 1 substance in sacramental tea under the 1993 Religious Freedom Restoration Act.

It is something she would love to repeat in her legal representation of Mohamedou Ould Salahi, who has been held for 10 years in a Guantanamo cell. He is an unwilling example – his lawyer would say victim – of what has happened in the US legal system in the wake of 9/11.

Mohamedou Salahi was arrested in his native Mauritania in November 2001 – transported first to Jordan where he was interrogated and tortured, then held at Bagram Airbase in Afghanistan for a few months before ending up in the newly established Guantanamo prison intended for people then-Defence Secretary Donald Rumsfeld called “the worst of the worst”.

Salahi was to be one of the first to be formally prosecuted before a military commission as early as 2004 but then there was a stumbling block. It came in the form of a military prosecutor.

Hollander takes up the story: “After Lieutenant Colonel Stuart Couch reviewed the evidence and the interrogation logs he refused to pursue the case because he realised that Salahi had been tortured. After thatthere has not been any effort to prosecute him.”

The Bush administration argued that Guantanamo Bay was in foreign territory, and as such the inmates had no recourse to the constitutional protections and rights provided for in US law. This argument was rejected by the Supreme Court in a landmark case in 2008 – in Boumediene v Bush the court ruled by five votes to four that detainees had a constitutional right to challenge their detentions in a federal court.

Then when Barack Obama became president a short while later he delivered another blow to the extra-legal system established in Guantanamo. On his first day in office Obama signed an Executive Order closing the prison, and shortly afterwards officially froze all prosecutions being carried out there by military commissions.

It was in this atmosphere that the case of Mohamedou Salahi was brought before a District Court in Washington, DC, in what is known as a “habeas” action, a legal writ asking for the release of someone being detained without legal cause.

The judge ruled there was not enough evidence to support the prosecution’s allegation that Salahi was part of al-Qaeda, and added in his ruling an important legal detail that association is not an assumption of guilt. He ordered Salahi’s release.

But the ruling was appealed by the Obama administration on the basis that the judge had not properly considered what constituted membership of al-Qaeda – the appeal was upheld by a circuit court and referred back to the judge for what amounted to a technical rather than legal clarification. He, in the interim, had retired – so in effect the whole legal process is back to square one and Salahi remains in his Guantanamo cell.

Hopes that the prison itself would be closed then began to rapidly recede. In the face of strong opposition from a Republican-dominated Congress, the Obama administration backed down on its pledge to close Guantanamo, and this year the president ordered the resumption of prosecutions by military commissions. As a result, Salahi could now be tried by military commission, despite the fact that his release was ordered by a civilian court.

On the face of it, his fate is being decided more by politics than by law. Nancy Hollander agrees. “Political decisions were made all through this case, as far as I’m concerned, about whether to appeal, about what evidence to use, about how to respond to us,” she says.

And although in reinstituting the military commissions new procedures were introduced, Hollander insists none of these provide for a fair trial as envisaged in the constitution. “The rules still allow for coerced testimony, allow for hearsay – this would never happen in our justice system ever. Yet that is what they are doing.”

An even greater danger to the US legal system, Hollander believes, is what she calls a process of osmosis in which the definition of “terrorism” has been widened so much that it is being used in cases far removed from any normal definition of the word.

This all seems a long way from the specifics of Mohamedou Salahi’s case, but that in a way is the point.

After 10 years without trial, he remains in a cell because of at what  – at best – is an assumption that he could be a security risk to the United States if set free.

Real security for the US, argues Hollander, comes from adherence to the Rule of Law – bad people get tried in court and convicted of defined crimes and suffer punishment accordingly but you cannot arrest someone and certainly cannot detain them because you think they might do something bad.

“We have a balance and the balance is you have to provide for people to feel safe and to have freedom otherwise you just have a police state. And my fear is that we get closer and closer to that,” she says.

Perhaps the most damaging effect of 9/11 and the “Gitmo” created in its wake is this: that the Obama administration’s re-endorsement of military commissions and non-civilian trials means Nancy Hollander may not be given the opportunity to keep winning the case for her client, Mohamedou Ould Salahi, in court after court, appeal after appeal. 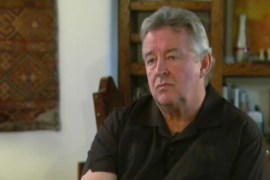 Former US ambassador to Iraq discusses 2001 attacks, invasion of Iraq, and the “dire consequences” of both. 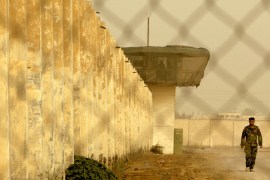 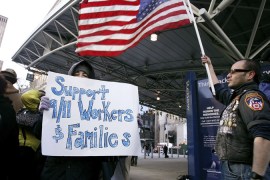 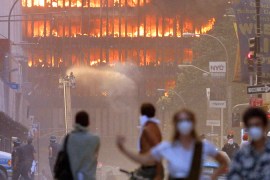