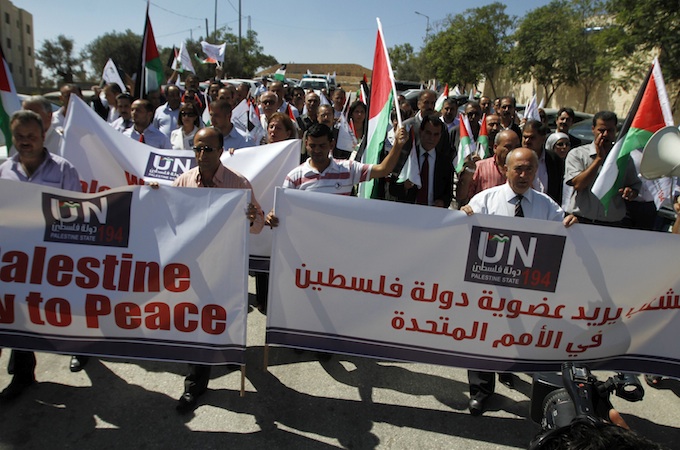 A group of Palestinian activists and officials have submitted a letter to the United Nations urging Secretary-General Ban Ki-moon to support the Palestinian Authority’s (PA) bid for recognition at the General Assembly later this month.

The letter was delivered to the UN office in Ramallah on Thursday following a short ceremony attended by about 100 people. It urged Ban to add his “moral voice in support of the Palestinian people”.

“Families of the tens of thousands of victims of Israeli occupation, including those martyred, wounded and imprisoned, and countless others who were expelled from their homes or lost their homes and their property, hope that you will exert all possible efforts toward the achievement of the Palestinian people’s just demands,” it read.

The letter was delivered by Latifa Abu Hmeid, a 70-year-old Palestinian woman who lost one son in fighting against Israel and has seven other sons in Israeli prisons because of their alleged activities.

A spokesman in Ramallah said the letter was not the PA’s official request for recognition, contrary to early media reports.

Mahmoud Abbas, the PA president, has said he will submit the official request to the UN later this month.

Until he does, it is unclear exactly what status the PA will request.

Full recognition requires the approval of the Security Council, and the United States has already said it would veto any such resolution.

The PA could instead pursue “non-member observer state” status, which would give it standing on par with the Vatican. That would require only a two-thirds vote in the General Assembly.

PA officials have also discussed submitting multiple requests for full recognition – forcing the US to keep vetoing them.

The PA is planning a series of marches and rallies, in the West Bank and internationally, to coincide with the vote.

Abbas is expected to address the General Assembly on September 23rd.

Negotiations between Israel and the PA collapsed last year over Israel’s refusal to halt the construction of illegal settlements in the occupied West Bank.

PA officials say the stalled talks have forced it to seek recognition at the UN.

Abbas has offered to suspend the bid if Israel halts settlement growth and agrees to use 1967 borders as a basis for negotiations.

Binyamin Netanyahu, the Israeli prime minister, insists that he will only resume talks without those preconditions.