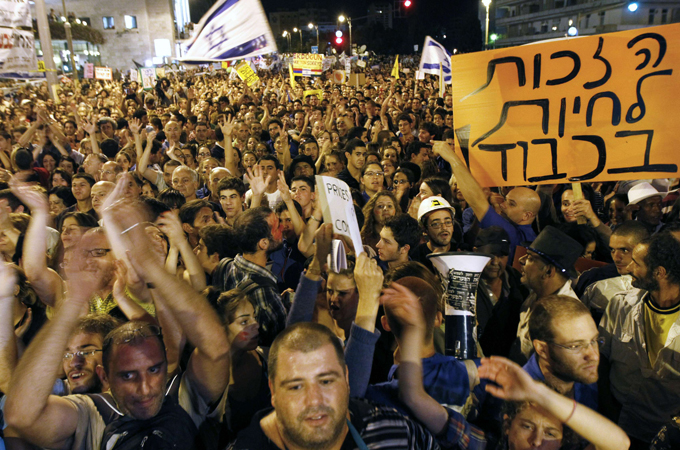 The rally was by far the summer’s largest, with Tel Aviv’s main square overflowing with demonstrators [Reuters]

An estimated 500,000 people took to the streets of Tel Aviv on Saturday night, by far the largest demonstration in the social protest movement that has swept the country for two months.

Protesters marched down Rothschild Boulevard, a fashionable street which has been the site of a tent city for the last two months. The first tents were a protest against Israel’s high housing prices, but the weekly demonstrations have grown to focus more broadly on Israel’s socio-economic problems.

Many carried signs complaining about privatisation – Israel’s once heavily state-run economy has been heavily privatised – and official corruption.

Some targeted specific businessmen believed to have benefited from their political connections, like the Ofer brothers, who have extensive holdings in Israel’s oil and gas industry.

Tens of thousands also marched in other cities, according to local media reports. At least 50,000 people rallied in Jerusalem and 40,000 in Haifa; more than 50,000 turned out in a half-dozen other cities.

In Tel Aviv, many streets were closed to traffic, and Kikar HaMedina (State Square), the largest plaza in the city, was filled to capacity with demonstrators.

Organisers were unsure how many people would show up for Saturday night’s rally. It was billed as the “million man march”, and was widely advertised around the city; groups of volunteers, some with signs and drums, walked around Tel Aviv on Saturday afternoon urging people to attend.

But the attacks in Eilat last month, and the looming Palestinian bid for statehood, distracted attention from the movement. Only about 10,000 people marched in Tel Aviv last week. Organisers feared a small turnout this week would have killed the movement.

Saturday’s turnout erased any doubts that Israelis are still enthusiastic about the movement. 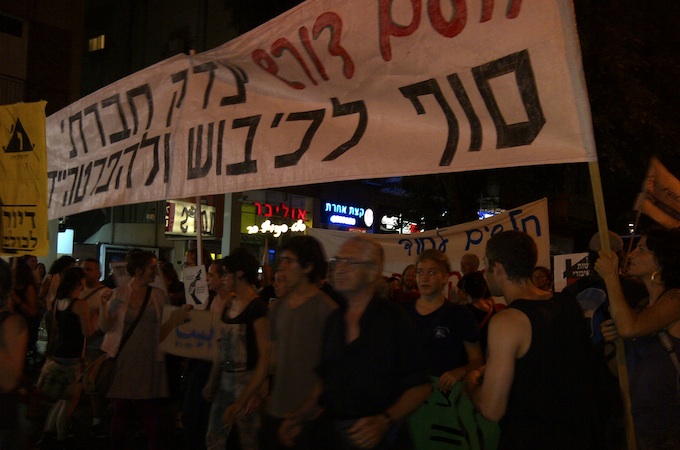 A few protesters held signs about the Israeli occupation, but most avoided the issue [Al Jazeera]

But the rally did little to answer another question – what comes next? Many Israelis seemed nervous about the movement’s future. Saturday’s rally, announced more than a month ago, could be the movement’s climax, and protest leaders have not outlined a strategy for keeping pressure on the government.

Prime Minister Binyamin Netanyahu appointed a committee to study Israel’s socio-economic problems and propose a set of solutions. The committee, led by Manuel Trajtenberg, a professor of economics, is due to present its recommendations later this month.

Trajtenberg has said the government will listen – but his committee’s recommendations are non-binding, and many protesters fear Netanyahu will simply ignore them

His right-wing coalition is tenuous, but few analysts think the protesters – and Israel’s moribund left-leaning parties – could actually force its demise.

“Sometimes you go for the path and not the end objective,” said Ben, an environmental protester whose sign said, “Social justice is environmental justice”.

“I doubt we’ll see any changes in the next three months,” he said. “Maybe over the next few years.”

One problem is that few protesters seem to agree on what changes they want. The rallies have grown to include a wide range of movements from across Israeli society. Animal rights campaigners, dairy farmers, gay rights activists.

All of them marched on Saturday night and all have different demands. Dairy farmers would be happy with a reasonable price for their products; Hadash, the Israeli Communist party, wants a more fundamental overhaul of the economy.

“What’s scary is that some of the groups are going to get what they want and go home,” said Doron Yaakov, a protester. “People have been talking about how this movement is united. But now it’s going to break apart.”

Dozens of protesters held signs and chanted slogans about the Israeli illegal occupation of the Palestinian territories. “Justice is exiting the territories,” one said. Another banner read: “The occupiers demand social justice / The occupied demand justice”.

But the vast majority of protesters avoided the issue. The movement’s organisers, too, have been reluctant to discuss the occupation, partly out of fear that it will divide what has been a unified movement.

“It’s not a mainstream subject,” said Gali Erez, sitting on a railing just outside the square. “Most people have a very aggressive reaction when you talk to them about the occupation. It would take time for people to start understanding.”

Several protesters did make a connection between the settlements, which cost billions of shekels to maintain, and Israel’s socio-economic problems. One sign bore a photo of Avigdor Lieberman, Israel’s right-wing foreign minister and a settler himself, with the slogan, “Where is the justice? Where is the money?”.

A few groups of Palestinian Israelis marched at the rally, including one from Jaffa that walked with protesters from Hatikva, a poor Jewish neighbourhood in southern Tel Aviv. But Palestinians, who make up more than 20 per cent of Israel’s population, have generally been under-represented at the demonstrations.