A rights group in Bahrain says more detainees are joining a hunger strike to protest ongoing trials from the crackdown on demonstrations for greater rights by the Gulf nation’s Shia majority.

A statement on Saturday by the Bahrain Center for Human Rights said the strike now includes nearly 20 doctors who are jailed and face anti-state charges linked to the protests against Bahrain’s ruling Sunni dynasty.

The rights group said at least two other prominent activists, Abdul Jalil al-Singace and Abdulhadi al-Khawaja, have also begun hunger strikes in solidarity. The activists were sentenced to life in prison in June.
Nabeel Rajab, a spokesman for the group, told Al Jazeera the detainees are insisting that a trial, if any, should take place in a civil court not a military tribunal.
The trials are scheduled to resume on Wednesday.
Rajab said because little change has come into effect despite promises of reform from the government, there are now renewed protests in the prisons and in the streets.
Zainab al-Khawaja says her father, Abdulhadi, and al-Singace, opposition Haq movement member, stopped eating on Tuesday in solidarity with detainees held at Bahrain’s Dry Dock prison.
She said the detainees, who were arrested as part of a March crackdown on pro-democracy protests, went on hunger strike against the government’s failure to honour promises to release them.
“I am concerned about my father’s health,” al-Khawaja said. “He was beaten when detained and his jaw was broken.
“He has already lost too much weight in prison and yesterday he called me and said his blood sugar level has dropped,” she added.
Abdulhadi al-Khawaja, who also holds Danish citizenship, was jailed for life along with Singace and six other opposition activists in June.
Bahrain’s interior ministry says 24 people, including four policemen, were killed in the month-long protests that erupted in mid-February.
Security forces backed by troops from Bahrain’s Gulf neighbours crushed the protest movement.
The opposition says that scores of people were arrested, and many of them tortured. Hundreds more were dismissed from their jobs.
Four people have been sentenced to death and three to life imprisonment after being convicted of the killing of two policemen during the protests.
Nine others were jailed for 20 years after being found guilty of abducting a policeman.
Source: Al Jazeera 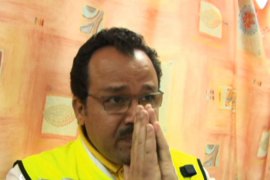