Kenyan Nobel Peace Prize winner Wangari Maathai has died in Nairobi while undergoing cancer treatment at the age of 71.

Maathai was the first African woman to win a Nobel Peace Prize in 2004 for promoting conservation, women’s rights and transparent government.

She was the founder of the environmental group Green Belt Movement, and had served as a member of parliament in 2002.

The organisation also campaigned on education, nutrition and other issues important to women.

“It is with great sadness that the family of Professor Wangari Maathai announces her passing away on 25 September, 2011, at the Nairobi Hospital, after a prolonged and bravely borne struggle with cancer,” the Green Belt Movement said in a statement.

Maathai, who was also a veterinary anatomy professor, rose to international fame for campaigns against
government-backed forest clearances in Kenya in the late 1980s and 1990s.

She branded the clearances a political ploy that caused irreversible environmental damage.

The courts blocked her suits and Green Belt lawyers complained that their cases were dismissed on technical grounds or their files were mysteriously lost.

Al Jazeera’s  Peter Greste reporting from Nairobi said “people in Kenya will remember Wangari Maathai for her courage and outspokeness regardless of the consequences.”

In her speech accepting the Nobel prize, Maathai said she hoped her own success would spur other women on to a more active role in the community.

“I hope it will encourage them to raise their voices and take more space for leadership,” said Maathai. 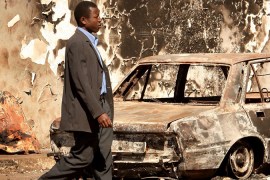 Has Kenya moved on?