Thousands of protesters in Yemen have returned to the streets of the capital, Sanaa, amid renewed clashes between tribesmen and government forces, a day after President Ali Abdullah Saleh delivered a defiant speech aimed at ending the country’s escalating unrest.

Protesters, unconvinced by measures that Saleh outlined on Sunday in his first speech since returning from Saudi Arabia after receiving medical treatment for injuries sustained in an attack three months ago, are calling on the president to step down.

“His speech was about creating chaos, not solutions. There was nothing there to solve this crisis,” said Abdullah Magany, a high school biology teacher sitting in Change Square, the street encampment at the centre of the protest movement, on Monday.

“We need to keep escalating our protests.”

In the north of Sanaa, anti-government tribesmen overran an army base housing an elite unit, security officials said, capturing 30 soldiers and dealing a blow to the prestige of the powerful Republican Guards led by Saleh’s son.

The assault by the tribesman on the Republican Guards’ base at Dahrah took place early on Monday. The defence ministry said in a statement that the base commander, Brigadier Ali al-Keleibi, was killed in the fighting. The statement gave no further details.

But officials told the Reuters news agency the tribesmen captured 30 guards when they seized control of the facility. At least four tribesmen were killed and 27 others wounded in the fighting, but the officials had no word on casualties among the guards.

It was the second Republican Guards’ base to be captured in a week. Protesters backed by renegade soldiers overran a base belonging to the guards last week in Sanaa as the opposition stepped up its campaign to oust Saleh.

Yemen has been wracked by violence since February when an uprising broke out to demand the ouster of President Saleh, who has ruled the country for more than three decades.

Government forces have killed hundreds in an attempt to stamp out the revolt, and the crackdown has intensified since Saleh returned on Friday from neighbouring Saudi Arabia .

In Sunday’s address, Saleh said he was committed to a power-transferring deal drafted by an alliance of Gulf nations that includes powerful Saudi Arabia.

His opponents, however, do not trust him and believe he is stalling for time while consolidating his hold on power.

Saleh has tasked his vice-president with overseeing negotiations on the deal, but at no point in his address did he provide any indication he might agree to demands to step down immediately. 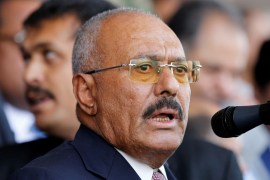 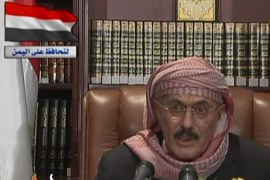 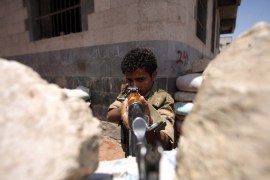