Mahmoud Abbas, the president of Palestinian Authority (PA), has arrived to a hero’s welcome in the West Bank city of Ramallah following his return from submitting a historic UN membership bid.

In a brief speech to a jubilant crowd outside the president’s compound on Sunday, Abbas said: “I headed to the United Nations carrying your message, your need of an independent state. The whole world met our demand with respect and appreciation.

“We are powerful and strong by your demands, so hold your heads high, you are Palestinians.”

Abbas also ruled out any peace talks without a “complete halt” to Israeli settlement building.

“There will be no negotiations without international legitimacy and a complete halt to settlements,” he said.

Al Jazeera’s Cal Perry, reporting from Ramallah, explained that Abbas had left the West Bank as a “weak”  leader but is “coming back to popularity that he really hasn’t seen before”.

“He has positioned himself as a man for the cause.”

A welcome party was planned at the Muqataa, the presidential headquarters in the city, and a stage was set up next to the grave of the former president, Yasser Arafat, inside the compound.

The Palestinian workers’ union called on its members to join the celebrations, and government offices were expected to close early to allow employees to attend.

Both state television and the state-run news agency WAFA called on the public to mass at the Muqataa, and Palestinians across the West Bank received text messages advertising “the official mass reception”.

Palestine TV devoted its broadcast to Abbas, broadcasting photographs of the leader throughout the years as well as footage of him meeting ordinary Palestinians and international figures.

“Urgent: Crowds of our people flock to the presidential headquarters to participate in the welcome reception for President Mahmoud Abbas,” a banner along the bottom of the screen read.

Abbas’s Fatah party also called on its members to attend, and buses were organised to ferry people from other cities in the West Bank, including Jericho and Nablus, to Ramallah for the event.

Abbas is experiencing an unprecedented boost in popularity after delivering a request earlier this week that the UN admit Palestine as a full member state.

His address to the UN General Assembly, delivered shortly after he formally submitted the bid, was broadcast live on big screens set up in the centres of major West Bank cities.

Crowds cheered Abbas, and he received rave reviews in the Palestinian media the next day, with commentators hailing his “brave” address and his courage in delivering the bid despite US and Israeli opposition.

“President Abu Mazen returns today and the masses have prepared to welcome him with a reception fit for the man who raised the voice of Palestine in the world’s most important forum – the United Nations,” Al-Quds newspaper wrote in its editorial on Sunday.

“Abbas’s return to the homeland today is a hero’s return and a return that could stir the stagnant waters of the Middle East.”

Full UN membership can only be bestowed by the UN Security Council where Abbas’ request will almost certainly be derailed, with the US vowing the veto the move.

Siding with Israel, US President Barack Obama has said a Palestinian state can only be established as a result of negotiations, and that there is no short-cut to Palestinian independence. 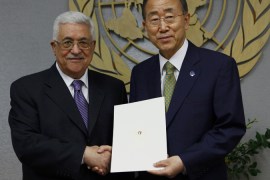 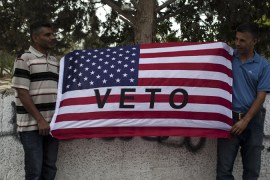 A look at the regional ramifications of the UN vote on Palestinian statehood. 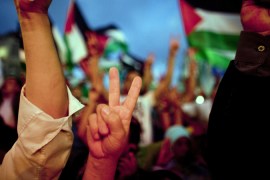 Who will support the Palestinian bid?

Amid cheers, Palestinian President Abbas made a call for full UN membership, but who in the UNSC will support his bid?