Barack Obama, the US president, has said “there is no short cut to the end of a conflict that has endured for decades” between the Israelis and the Palestinians.

In a speech to the UN General Assembly, Obama expressed frustration at the failure of both parties to bridge their differences and at the Palestinians’ decision to seek full membership of the UN through the Security Council later this week.

While conceding both sides had “legitimate aspirations,” Obama said peace would not come through statements and resolutions at the UN, but rather only through a resumption of direct negotiations.

He said the parties are the only ones who can agree on the issues that continue to divide them.

He sought to reassure Palestinians he was not abandoning his pledge to help them achieve eventual statehood, while also placating Israeli concerns about Washington’s commitment to their security.

“Palestinians need to live in a sovereign state of their own. Their vision has been delayed for too long. That is why the US has spent time and money helping to build a Palestinian state,” Obama said.

He then added: “Yet America’s commitment to Israel’s security is unshakeable and our friendship with it is enduring.”

Members of the General Assembly, where pro-Palestinian sentiment is high, listened politely but had only a muted response to Obama’s 36-minute speech.

Obama then later told Palestinian President Mahmoud Abbas that the US would veto any Security Council move to recognise Palestinian statehood.

“We would have to oppose any action at the UN Security Council including, if necessary, vetoing,” Ben Rhodes, the White House national security council spokesman, told reporters after Obama met Abbas in New York.

The Obama administration says that only direct peace talks can lead to peace with the Palestinians, who in turn say almost two decades of fruitless negotiation has left them no choice but to turn to the world body.

Mahmoud Abbas, the president of the Palestinian Authority, and Binyamin Netanyahu, the Israeli prime minister, had separate meetings with Obama after the speech.

Speaking to gathered world leaders later on Wednesday, Nicolas Sarkozy, the French president, proposed a
timetable for Israeli-Palestinian peace, with resumed talks in one month, agreement on borders and security in six months, and a final deal in one year.

Sarkozy told the General Assembly that after 60 years of failure it was time to change tactics.

He said efforts to reach an accord must include a broader range of players, including Arab nations who have been sidelined. Sarkozy said talks were “doomed to failure” if either side sets preconditions.

Sarkozy also said that a US veto of the Palestinian bid would trigger violence.

“Who could doubt that a veto at the Security Council risks engendering a cycle of violence in the Middle East?” said Sarkozy.

Earlier on Wednesday, tens of thousands of people gathered in Ramallah and Nablus in the occupied West Bank, in a show of support for the Palestinian bid to secure full membership at the UN.

Al Jazeera’s Cal Perry, reporting from Ramallah, said people rallying in there were aware of the diplomatic talks taking place in New York.

Thousands marched into Arafat Square in Ramallah, and schools and some businesses were shut as people came out in support of the bid for Palestinian statehood, he said.

In Nablus, some demonstrators said it was a big day for Obama. “Let’s hope he does not let us down,” they said.

Recognising that Abbas is likely to proceed with his bid, Obama is expected to privately ask the Palestinian leader to essentially drop the move for statehood recognition after Abbas delivers a formal letter of intent to the UN on Friday, after his address to the UN General Assembly.

“The president will say, frankly, the same thing in private that he’ll say in public, which is that we do not believe that this is the best course of action for achieving Palestinian aspirations,” said Ben Rhodes, the White House deputy national security adviser.

Obama’s stand has surprised many Palestinians, with the Palestinian foreign minister saying he was “amazed” by the US efforts to persuade other countries not to support the UN bid.

“I think it is very strange that Obama will veto a bid for Palestinian statehood, when a year ago at the UN General Assembly he supported the idea,” he said.

“Palestinian statehood will create a new political situation where Israeli will be occupying another country.”

The Palestinian Liberation Organisation (PLO), of whom Abbas is chairman, says it is pressing for statehood after talks with Israel stalled.

The new approach being considered would see the “quartet” of the peace mediators, including the US, UN, European Union and Russia – issue a statement addressing both Palestinian and Israeli concerns and setting a timetable for a return to the long-stalled peace talks, officials close to the diplomatic talks said.

The statement would also endorse the idea of “two states for two peoples, Jewish and Palestinian”, according to the AP news agency.

The White House appeared to hold out little hope that Abbas would not go ahead with the bid.

“President Abbas has indicated his determination to go to the Security Council, so we take him at his word on that,” Rhodes said.

The simmering situation is far from the scenario Obama envisioned when he spoke at the UN one year ago.

“We should reach for what’s best within ourselves,” Obama said last September in pushing for negotiated agreement on a sovereign Palestinian state.

“If we do, when we come back here next year, we can have an agreement that will lead to a new member of the United Nations.”

Should the Palestinian bid fail, Abbas could ask for a vote of the General Assembly for an enhanced observer status, which is enjoyed by others such as the Vatican, in which case no veto would be possible.

While UN recognition would have largely a symbolic value, the Palestinians argue that it would strengthen their hands in peace talks with Israel, especially on the final issues that divide them.

These are the precise location of the border, the final status of Jerusalem, the right of return of Palestinian refugees, water, and security.

On Wednesday, clashes broke out at the Qalandiya Crossing between Ramallah and Jerusalem.

Several youths and one Israeli soldier were said to have been injured. 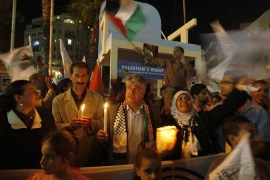 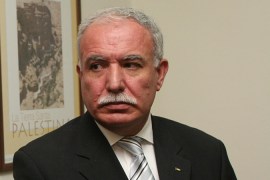 Foregin minister says Israel must accept terms of reference before negotiations can resume, as suggested by Netanyahu. 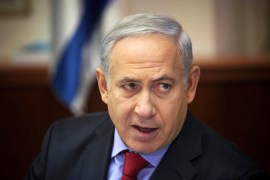 Netanyahu calls for talks with Palestinians