Libya’s ruling National Transitional Council has given one extra week to Muammar Gaddafi loyalists to lay down weapons.

The council, known by its acronym NTC, has extended the deadline for surrender of Gaddafi’s last bastion Sirte by one week, Mohammad Zawawi, an NTC spokesman, said on Thursday.

“We are not in a rush to get in to Sirte. It has no economic importance and we are not going to lose casualties for it. We can cut supplies and wait, even more than a week,” he said.

The talks come alongside a blockade of supplies to the town, an NTC official said.

Al Jazeera’s Hoda Abdul Hamid, reporting from Nawfalia east of Sirte, said: “This is the consequence of ongoing talks between NTC leaders and tribal leaders in Sirte and another nearby town Harawa.

“The idea is to give time to negotiations which is going on between the tribes in Sirte.”

She said some tribal leaders based in Nawfalia and Ben Jawad area have been given the role of negotiating on behalf of the NTC.

“NTC is trying to get some sort of tribal allegiance as it will play very important role in the final outcome in Sirte,” our correspondent said.

NTC officials have said they are attempting to convince Gaddafi loyalists in Sirte that the old regime is finished, and that they will be treated fairly if they surrender.

It has warned of an all-out military assault if Gaddafi loyalists do not yield the town, one of the last holdouts after fighters streamed into the capital, Tripoli, last week and ended Gaddafi’s 42-year rule.

The rebels said on Tuesday they were ready for the final battle of their more than six-month uprising after their leaders gave Gaddafi’s loyalists a Saturday deadline to surrender.

Mustafa Abdel Jalil, the head of the ruling NTC, had said the respite was offered to mark the three-day Eid al-Fitr feast which follows the end of the Muslim fasting month of Ramadan.

“From Saturday, if no peaceful solution is in sight on the ground, we will resort to military force,” Jalil said.

The development comes a day after Gaddafi’s son Saadi said he had been in contact with the NTC to help negotiate an end to “bloodshed” and that he had his father’s blessing to do so.

But in a sign of division within Gaddafi’s family, his other son Saif al-Islam vowed to continue resistance.

“We would like to tell our people that we are well and good. The leader [Muammar Gaddafi] is fine. We have more than 20,000 armed youths and we are ready to fight. I tell our men to strike back against the rats,” Saif has been quoted as saying on the pro-Gaddafi al-Rai television station.

Libyan fighters said security would be guaranteed for Saadi if he surrendered, AFP news agency reported.

The statements from the Gaddafi sons came as NATO confirmed that it had bombed remaining outposts of Gaddafi’s supporters in Libya, targeting their tanks and armoured vehicles as well as military facilities.

The Western military alliance said on Wednesday its jets had bombed Gaddafi forces near Sirte a day earlier.

They also hit targets in the area of Bani Walid, a desert town and a Gaddafi stronghold 150km southeast of the capital, Tripoli.

Gaddafi loyalists are now believed to be limited to three main areas in the country: Bani Walid, Sirte and Sabha.

Sirte, to the east of Tripoli, is the birthplace of Gaddafi and fighters opposed to him are concentrating their efforts to seize the town. 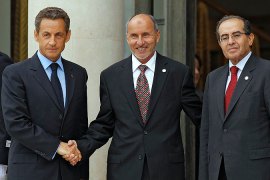 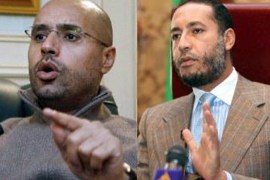 Saif al-Islam vows to fight on in new message while brother Saadi says he is seeking negotiations to end bloodshed. 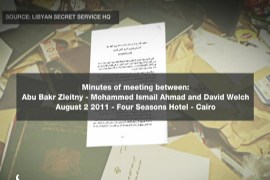 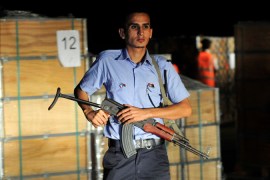