Hiroshima, Japan – In August 1945, Hiroshima was turned into a burning inferno as the Americans dropped an atomic bomb on the city.

Keijiro Matsushima was 16 years old when he witnessed the attack which claimed roughly 100,000 lives in one day.

He recalls how August 6, 1945, was a beautiful day, with a blue sky. Matsushima had returned to school only a week earlier, after he and his peers were mobilised to work for a year and a half in a factory producing military uniforms.

At 8.15 in the morning, his class had just started. He was listening to his teacher explaining a question on differential and integral calculus.

“I was looking out through the window and saw two American B-29 bombers. I just thought ‘American planes again’, assuming they were out for some routine work.”

When he looked back at his books, the bomb exploded.

“There was a very strong flash and a heat wave. The whole world turned into something orange. I felt like I was thrown into an oven for a moment”.

Later, he learned that temperatures on the ground near the hypocentre, 2km from his school, had reached at least 3,000 degrees centigrade.

The flash was followed by a loud boom. Until now, Matsushima doesn’t know whether it was the sound of the explosion or of collapsing buildings.

“I covered my ears and eyes and jumped under the desk,” he says.

“It was pitch black, I could see nothing. So many boys in the room, but no one screamed.

“There was a deadly silence. I was crawling around, thinking ‘help me mother, help me Buddha’. It was the first time I prayed to Buddha.”

Matsushima describes himself as one of the most fortunate survivors. He got some cut wounds from glass splinters, but suffered no serious injuries.

“I thought it had been just one bomb. But when I got out, I was shocked to see that all buildings had been hit. I was thinking, ‘just two planes, what did they do?”

One of his friends had a big cut in his head. Matsushima covered the wound with a piece of textile and supported his friend as they walked slowly towards the nearby Red Cross hospital.

Buildings were on fire and the two boys met scores of injured people walking along the tram tracks, away from the mayhem in the heart of the city.

“Their hair stood up straight. Some had lost their hair,” Matsushima recalls.

“Some were so badly burned from head to toe, their skin peeling from their heads. Their clothes were burned, some were almost naked.

“I thought to myself, ‘Hiroshima is dying’.

I could see red muscle under their skin. They held their arms forward, all of them ... They were walking slowly in a long line, hundreds of them, like a procession of ghosts.

But a lot of people could walk no more.

“I could see red muscle under their skin. They held their arms forward, all of them, maybe because of the wounds. They were walking slowly in a long line, hundreds of them, like a procession of ghosts.”

“People were crawling towards the river, crying out for water to cool their burns. But many died on the river banks or drowned. The river was full of bodies.”

Matsushima says the Red Cross hospital had also been damaged in the blast, and only a few doctors and nurses, themselves wounded, were struggling to treat hundreds of injured.

Realising that there was no help to get, Matsushima walked away with his friend, who was fortunate enough to be picked by a rescue truck and taken to a hospital outside the city.

Within 2km of the hypocentre, most buildings were completely burned and destroyed.

Hiroshima played a strategically important role during the second world war, housing army supply facilities and some of the military headquarters.

About 400,000 people were in the city when the bomb was dropped. Most residents had been mobilised to work in military factories along with Koreans and other forced labour. Many forced labourers survived harsh working conditions only to be killed in the bombing.

Matsushima’s mother had evacuated the city earlier in the year, following the death of her husband.

The dormitory where Matsushima was staying had been destroyed. He left Hiroshima on foot, and managed to get on a rescue train some kilometres away, to finally reach his mother’s house in the countryside.

She had seen the mushroom cloud of smoke billowing above the city, and had assumed that her son had been killed.

The next day, Matsushima became very ill, with fever and diarrhoea, but he recovered after a week. He thinks that because he stayed away from the city after the disaster, he avoided most of the radiation.

Many others stayed in Hiroshima to help with rescue efforts or search for loved ones, not knowing about the danger they were exposed to.

The fact that the atom bomb was dropped during the hot season slowed the recovery process for those with injuries, many of whom got infested wounds.

“They got maggots in their wounds and took them out with chopsticks. People died, one by one,” Matsushima says, shaking his head at the sad memories.

They got maggots in their wounds and took them out with chopsticks. People died, one by one.

Only after Japan surrendered on August 15 did the Japanese found out what kind of bombs the Americans had actually used.Just three days after Hiroshima was hit, another atomic bomb was dropped on the city of Nagasaki.

By the end of the year, about 140,000 deaths in Hiroshima were attributed to the bomb, including people killed in the explosion and later due to radiation and injuries.

Today, Hiroshima is a modern city, completely rebuilt, with a population of about one million. Only the so-called A-bomb dome stands as a reminder of the massive destruction. The building was used as an exhibition hall at the time and its robust concrete structure was left standing as the bomb exploded almost directly above it.

Despite the sufferings the attack caused, Matsushima feels no bitterness towards the Americans.

“People go crazy in wars, wanting to kill the enemy. If Japan had owned an A-bomb, we might have used it. Arguing about the past is nonsense. Now we have to co-operate to abolish all nukes.” 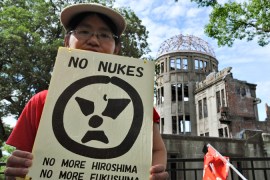