Yoshihiko Noda, soon to be confirmed as Japan’s new prime minister, likens himself to an ocean bottom feeder rather than a glittering goldfish. But that, he says, is his appeal.

The 54 year-old Democratic Party leader, who assumed office on Monday, faces multiple challenges if he hopes to restore faith in government among Japanese, who have now seen six prime ministers in the last five years.

Once confirmed by parliament, Noda must tackle pressing economic woes and steer Japan’s recovery after the devastating earthquake and tsunami on March 11.

He replaced Naoto Kan, who resigned as the leader of the Democratic Party and prime minister after his popularity plummeted in the aftermath of the disasters.

The former finance minister has stressed his credentials as a responsible, moderate leader at a time of national crisis.

“I am an ordinary man. I do not have large financial resources… I am not stylish and my looks are not my selling point,” Noda said when he announced his candidacy.

The son of a paratrooper in the Japanese military, Noda is a married father of two and a keen judo fan. He holds broadly conservative political views.

Noda is a graduate of the prestigious Waseda University’s School of Political Science and Economics. He also studied at the Matsushita Institute of Government and Management, an elite leadership course that includes training in ancient arts such as the Japanese tea ceremony, kendo stick fighting and Zen meditation.

He was first elected at age 29 to the legislature of Chiba, outside Tokyo, and entered national politics in 1993 with the short-lived Japan New Party. Noda joined the Democratic Party in 2000.

After holding several positions in the Diet, Japan’s parliament, he became finance minister in June 2010.

The Japanese economy, which has been plagued by decades of deflation, slid into a post-quake recession and has struggled to bring down huge public debt. A strong currency, the yen, is hurting exporters and threatening a fragile recovery.

Noda has voiced support for tax hikes to fix the nation’s finances. Japan’s public debt is twice the size of its $5 trillion economy, the highest ratio in the industrialised world.

Noda courted controversy when he said Japanese leaders convicted of war crimes at the end of World War II were not criminals under domestic law. 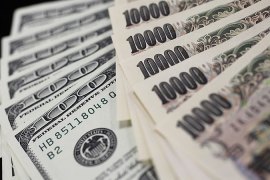 In a bid to strengthen its economy, the government intervenes in the currency markets to weaken the yen. 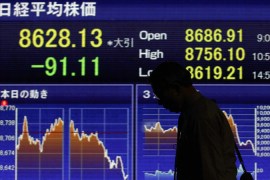 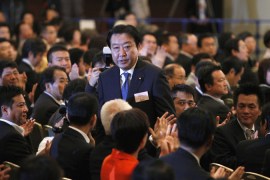 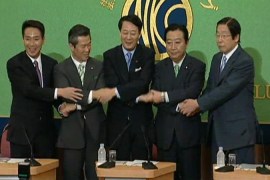