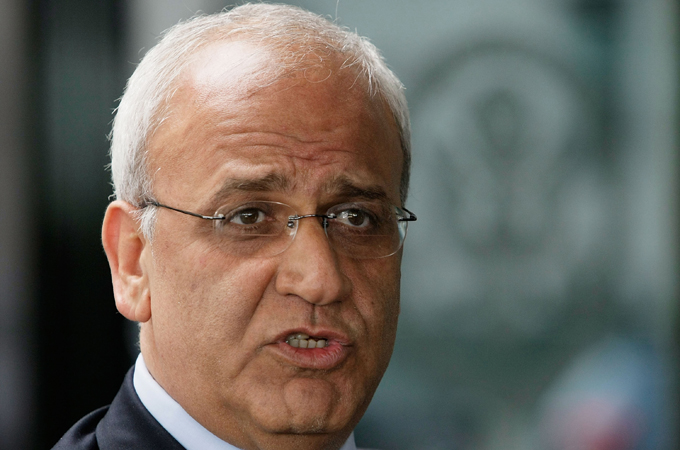 Saeb Erekat met on Friday with Daniel Rubinstein, the US consul general in Jerusalem [EPA]

A senior American diplomat reportedly warned on Friday that the United States would cut aid to the Palestinian Authority if it asks the United Nations to recognise a Palestinian state next month.

Daniel Rubinstein, the US consul general in Jerusalem, said the United States would veto any resolution in the Security Council. He threatened “punitive measures” if the PA moves forward with the statehood bid at the General Assembly.

Rubinstein reportedly made those threats during a meeting with Saeb Erekat, the Palestinian Authority’s chief negotiator, according to a statement issued by Erekat’s office.

“In case the Palestinian Authority seeks to upgrade its position at the UN through the General Assembly, the US Congress will take punitive measures against it, including a cut in US aid,” Rubinstein said, according to the statement.

But a US State Department spokesman said in an e-mail that Erekat’s statement “is not an accurate portrayal of the US position,” and denied that Rubinstein made those comments.

Several members of Congress – Democrats and Republicans alike – have already threatened to slash aid for the PA if it pursues the statehood vote.

The US gave roughly $470m to the Palestinian Authority last year, more than 10 per cent of the authority’s $3.7bn annual budget. Foreign donations make up roughly one-quarter of the PA’s budget; the European Union is the other main contributor.

Erekat also met on Friday with Christian Burger, the European Union’s envoy to the PA. The EU has not yet announced a position on the statehood bid.

The PA is expected to ask the UN General Assembly next month for “enhanced observer” status, which would give it standing on par with the Vatican.

The Security Council would have to approve full statehood, and a US veto would doom that measure.

Palestinian officials argue that they have no choice but to seek a UN vote, because Israel’s ongoing construction of illegal settlements in the occupied West Bank is eroding the prospects for two states.

Israel says both sides should resolve a few intractable issues – including borders and refugees – before Palestine seeks recognition. Talks between Israel and the PA collapsed nearly a year ago over Israel’s refusal to halt settlement growth.