Celebrations have spilled over from Tripoli and Benghazi into cities around the world, as the Libyan diaspora gathered to celebrate the advance of opposition forces.

At least a hundred Libyans gathered outside the White House on Monday to celebrate the rebel’s assault on Tripoli, waving the country’s flag and chanting “Libya is free” and “Thank you, Obama”.

“Tonight for the first time in our lives we are very proud to be Libyan,” Rania Swadek, a 33-year-old Libyan-American, told the AFP news service. Swadek was waving a sign showing the red, black and green rebel flag with the words “Thank you, NATO! Thank you, Obama!”

The mother of two, who arrived in the US in 1984 with her brothers and sisters after receiving political asylum, also had kind words for France, which was among the first countries to call for international intervention in Libya.

“We want to say thank you to President Nicolas Sarkozy and the French people who were the first, even before the Americans, to support the Libyans in their struggle,” she said.

While Gaddafi’s regime has not yet fallen, many Libyans were celebrating what they believed was the beginning of the end.

“They already have the sons,” Swadek said, referring to reports that one of Gaddafi’s sons, Saif al-Islam, had been arrested and another, Mohammad Gaddafi, also detained by rebels.

“Now we want him alive for a trial for all the crimes against humanity he has done, not just now but for four decades,” Swadek said, referring to Gaddafi.

Libyans gathered outside their embassy in Cairo on Monday and demanded that the green flag of Gaddafi be replaced with the opposition’s flag.

“As an individual, my demands would be first and foremost, since I’m here in Cairo, for the Libyan embassy in Cairo to lower its flag and raise the flag of the independence and for the Egyptian military council to recognise the [National] Transitional Council,” said Omar, a Libyan celebrating in Cairo, who did not disclose his last name.

In Alexandria, Egypt, hundreds gathered outside the consulate and also clamoured for the removal of the green flag of Gaddafi.

Crowds also gathered outside the Libyan embassy in Tunis, capital of Tunisia, celebrating the reports of the fighting in Tripoli. Waving the flag of independence, many expressed their joy at the news.

The Libyan ambassador in Malta allowed the removal of the Gaddafi flag and raised the emblem of the opposition forces. About 100 people gathered to celebrate the battle for Tripoli.

According to Malta Today, pro-rebel supporters chanted “Libya, Libya”, and “Down with Gaddafi”. Authorities allowed demonstrators to enter the embassy where they took to the roof and replaced the old flag.

In Sarajevo, however, police were forced to surround the embassy after a dozen Libyans entered the building, threw Gaddafi’s pictures out the windows, raised the rebels’ flag, and demanded the resignation of the ambassador.

Yet, according to an embassy employee who spoke to The Associated Press, the ambassador is a ‘die-hard Gaddafi supporter’ who refuses to leave. Currently the Bosnian police are inside the building trying to keep the negotiations peaceful.

Wait is ‘finally’ over

In Washington, children wore “Free Libya” shirts with the colors of the rebel flag. One demonstrator waved a large multicoloured sign with the capital letters “FINALLY”.

About 40 men knelt facing Mecca to pray, some used the rebel flag as a prayer mat.

Among them was Khaled Rouini, a 42-year-old Tunisian taxi driver, who could not hide his excitement.

“I came to the White House to celebrate the revolutions in Tunisia and Egypt,” he said, sporting a “Free Libya” T-shirt. “And now it is in Libya,” he added.

Ahmed Ilhnish, draped in the rebel flag, said he had been overwhelmed by emotions.

“There is no word to tell what we feel,” he said. “Now it is just a matter of time.”

“I have been waiting this day since the day I was born,”  Ilhnish continued. “I was in Benghazi in March when the French planes first came. I’m going to get back in Tripoli tomorrow or in a few days as soon as they get him.” 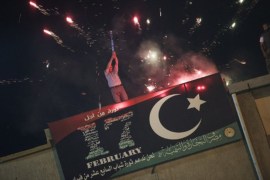 Celebrations in Tripoli as Gaddafi’s defences collapse and two of his sons, including Saif al-Islam, are captured. 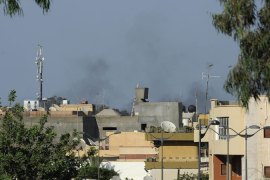 Gaddafi pledges to stay in Tripoli until the end in new audio address, as opposition fighers close in on the city. 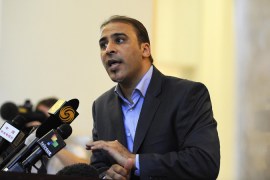 Covering events in Libya as they unfold. 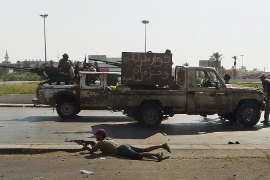