The late eighties and early nineties formed a turning point in the contemporary political history of the Indian administered valley of Kashmir. The streets and homes of Kashmir were resonating with a shrill, resounding, popular call for freedom from India. Life in Kashmir was changing from daily meanderings to a heightened sense of history and ages of injustices meted out to Kashmiris as a people. This manifested itself into massive popular protests, declaring popular support for the armed struggle against Indian rule, which had been launched in the late 1980s.

As Kashmiri masses were riding high on the wave for “azadi” [“freedom” – from India]; women did not remain impervious to the charged political landscape. They were pushed by circumstance or sentiment of nationalism to engage either as victim-activists, protesters or as separatist politicians. However, a Kashmiri woman’s identity and place in historical accounts describing her position in the ongoing struggle – more often than not – is seen to rest at being a “victim”.

Relegating women’s engagement in conflict situations to the passive space of victimhood is an anticipated outcome of the unequal distribution of power in gender relations. However, this narrative obfuscates their role as active participants, which is of equal, if not greater, significance – and which has increasingly become an accentuating facet of their participation during the recent years of the conflict.

In the early stages of the armed struggle, broad-based support for the independence movement was apparent, and resulted in the creation of both dissident men and women. However, men and women formed their opposition to Indian rule largely in different ways. Men took to combat, women to facilitating the men’s fight, or by registering their support for azadi through popular protest.

Women also became facilitators of combat by acting as couriers for arms, informers for militants, provided them shelter and food, and at times helped them escape capture during the sudden and dreaded Indian military raids or “crackdowns”, which continue to happen in civilian areas. Their motivation came from the general feeling for independence running deep in the masses – as a result of which, the Indian Armed Forces were always looked at as the “other”, and militants and other dissidents as their “own”.

Notwithstanding their support for the struggle for independence, women’s engagement as combatants remains unknown. This can be attributed to the social structures which perceive such kind of participation by women as taboo and promise unprecedented difficulties in living a normal social life, which in turn may have been responsible for impeding women’s active engagement as combatants.

The ranks of major guerilla outfits such as Hizb ul Mujahideen and the Jammu and Kashmir Liberation Front – which turned from armed to non-violent resistance in the early 1990s – primarily comprised men. Nevertheless, they also had women’s wings – Binatul Islam and Muslim Khawateen Markaz respectively. Yet, the engagement of these outfits remained primarily political and non-military.

The All Party Hurriyat Conference – the umbrella organisation spearheading the movement for independence – also has women’s organisations, such as the Muslim Khawateen Markaz (MKM), and the Dukhtaran-e-Millat (DM) as constituent members. Both the MKM and DM have a political mandate professing separation from India while, in addition, carrying out social and human rights activism.

Yasmeen Raja and Zamruda Habib head the two factions of the MKM, and Asiya Andrabi chairs Dukhtaran-e-Millat. However, DM’s representative character can be seriously challenged, considering its radical Islamist approach is hardly endorsed by anyone, save a handful of Asiya Andrabi’s sidekicks. Also, Fareeda Dar (Fareeda Behenji) heads the Jammu and Kashmir Mass Movement, which also is a member organisation of the Hurriyat.

All of these women have served multiple years in jail for overt or covert support for the independence movement and are constantly harassed by the Indian security apparatus because of their political involvement. They come from middle class backgrounds and chose to give up a possible life of comfort for risk and tribulations. A hard choice to make, considering separatist politics can be problematic at the familial level, given the risk of state repression that it entails.

Dissent is always followed by repression – and in a conflict, the interplay of both brings about violations of human rights. This characterising aspect of the conflict also led to the birth of what could be dubbed the “victim-activist” woman. Parveena Ahanger personifies this to a tee. Her son, Javed, then 14 years old, was picked up by the Indian Armed forces, never to be returned to his family. He became one of the many who were subjected to enforced disappearance.

The illiterate Parveena, instead of embracing the passive space of victimhood, chose to engage actively. She founded the Association of Parents of Disappeared Persons and brought together people who had similarly suffered. She continues to seek justice for the wrong meted out to her and to others of her ilk, through protest and advocacy.

Also, Zamruda Habib, after her release from Tihar Jail, where she was lodged for the continuation of her separatist political participation, and, owing to her torturous experiences as a Kashmiri political prisoner in an Indian jail, founded the Association of Families of Kashmiri Prisoners (AFKP). The AFKP provides psycho-social support to the families of Kashmiri prisoners held in Indian jails, as well as tracking and documenting their cases.

In both cases, their experiences of individual affliction has led to their participation in the movement.

Social ties were therefore responsible for inhibiting, as well as prompting, women’s engagement as positive actors in the conflict. In the 1990s, their participation was primarily motivated by a general feeling of nationalism and the sentiment for azadi born from it. As time passed, the Indian state’s sustained “iron fist policy” and the general denial of justice gave impetus to the already existing popular call for independence, arising out of a sense of personal and general suffering and the memory it gave rise to.

Another strain of actively engaging women, which keeps coming to prominence intermittently, yet consistently, is that of the women protesters. They were seen wearing shrouds and chanting pro-freedom slogans in marches against Indian rule in the early years of the conflict. Many were killed or injured in shoot-outs by Indian Armed Forces while on these demonstrations.

In the mass protests of 2008 and 2010, an increasing number of women participated alongside men; at times even leading all-women protest marches. The former were triggered by the illegal transfer of Kashmiri land by the local government, and the latter, by arbitrary teenage killings by Indian paramilitaries.

These summer protests of 2008 and 2010 were punctuated by protesters pelting stones at Indian troops, which became their defining feature, often triggering comparisons with the Palestinian intifada. Interestingly, women also engaged in stone-throwing, together with chanting anti-India and pro-freedom slogans such as: “We want freedom” and “Blood for blood”.

One of the most gripping images that came out in the local press around that time was of a Kashmiri woman in her late sixties, dressed in traditional attire, hurling a large stone towards a soldier. Some women were quoted saying: “We have lost patience. They have killed our sons and brothers. How do you expect us to be mute spectators?” Some said they had joined protests in solidarity with those who had lost their loved ones. Others thought that they, as women, also have a participatory role in the struggle against injustice and the demand for freedom. In addition to this, in keeping with their assigned gender roles, they also cooked for – and distributed drinking water to – their fellow protesters.

The active participation by women in the Kashmir conflict involves an individual struggle for many on varying planes. It demands a counterbalance of their private space of home and hearth with the public sphere of political action. It requires departing from gender stereotypes and creating a meaningful political space for themselves. Kashmiri society, being patriarchal and largely conservative – in spite of the liberating influence of Sufi Islam – is still not comfortable with a woman’s active political participation in the public sphere, especially where there is a high level of risk involved – as in case of separatist politics or street protest. Consequently, the women who militate against the state have also to struggle against and wriggle themselves away from the social structures that maintain a tight grip on their lives. One would therefore feel no qualms in stating that these women give full meaning to what it means to find the militant within.

Aaliya Anjum is a lecturer in international law and human rights at the Vitasta College of Law, University of Kashmir. She is also a contributing author to the anthology “Until my freedom has come: The new intifada in Kashmir” (Penguin, 2011). 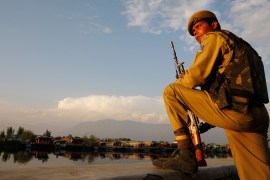 Azad Essa talks to the chief of police for Indian-administered Kashmir about enforced disappearances. 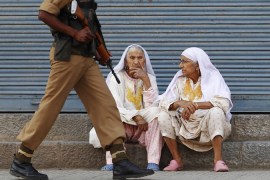 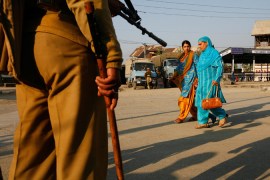 More than 1,500 women whose husbands have disappeared are in danger in Indian-administered Kashmir, report says.