The meeting is seen as the latest olive branch from the army-backed government that came to power this year after five decades of direct military rule.

Suu Kyi, who spent 15 years under house arrest for campaigning for democracy, flew to the capital for the meeting with Thein Sein, formerly a top general in the military regime.

It was the first visit by Suu Kyi to Naypyitaw, a city built in 2005 on a mountain plateau 330km north of Myanmar’s old capital and biggest city, Yangon.

The meeting, which took place at the presidential palace, lasted nearly an hour and was “significant,” a government source told The Associated Press news agency. However, no details of what was discussed were made public.

Nyan Win, the spokesman for Suu Kyi’s Nation League for Democracy party told the AP that Suu Kyi’s meeting “could be the first step toward national reconciliation,” but declined to elaborate until details were available.

Suu Kyi, 66, was released when her latest term of house arrest expired last November, just after elections that were widely criticised as a sham after the army appeared to make sure it dominated parliament and the new cabinet.

Thein Sein, who took office in March, is regarded as one of the more moderate members of the new government which contains many hardliners opposed to any engagement with Suu Kyi.

The military’s unbroken, 49-year grip on power officially ended in March, when the ruling State Peace and Development Council made way for a nominally civilian government led mostly by retired generals.

Suu Kyi’s National League for Democracy (NLD) boycotted the 2010 elections, because of election laws it said were unfair.

The NLD won the polls before that, in 1990, but was never allowed to take power.

Despite her detention, Suu Kyi, the daughter of Myanmar’s late independence hero, General Aung San,  remained the figurehead of the country’s democratic movement. 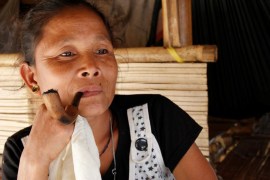 A 60-year-old war between Karen rebels and the government of Myanmar has left hundreds of thousands displaced. 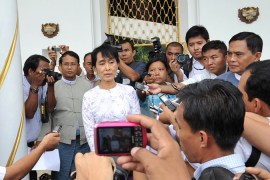 Despite a government warning, pro-democracy leader meets with supporters outside Myanmar’s main city. 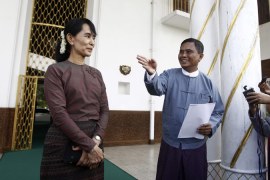 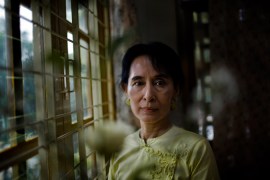