Libya’s opposition fighters claim to have taken control of a strategic oil refinery in the western town of Az Zawiyah and also to have blocked the main highway north to the capital, Tripoli.

“The battle [for the refinery] lasted for two days but the main battle was last night. We took control last night,” Saleh Omran, a rebel fighter from Az Zawiyah told the Reuters news agency on Thursday from inside the refinery complex.

He said rebel fighters forced the troops of Colonel Muammar Gaddafi to flee the seaside refinery, a major source of fuel for the loyalist troops in Tripoli.

The refinery complex, located about 50km west of the capital along the highway linking Tripoli to Tunisia, was reportedly under rebel control on Thursday.

Rebel forces also claimed to be in control of the town of Surman, 60km west of Tripoli, and Gharyan, 50km to the south, days after claiming to occupy Az Zawiyah.

Doctors at a hospital a few kilometers south of Az Zawiyah said nine people were killed and at least 45 injured in fighting around the town and at the refinery on Wednesday.

Control of the road between Surman and Az Zawiyah would be easier for opposition fighters to cut supply routes to the capital, further isolating Gaddafi’s stronghold.

A slew of explosions were heard around 1:00 am (2300 GMT) in the heart of the seaside capital where Gaddafi’s residential complex is located, as well as in several areas in the west of the city.

On Thursday, central Tripoli and the eastern suburb of Tajura were targeted by NATO warplanes, according to witnesses.

Moussa Ibrahim, the Gaddafi spokesman, played down rebel gains and said the government remained in control of the country.

“This is a crisis that will last a few days and then it will be – God willing – overcome,” Ibrahim was quoted as saying by the JANA news agency on Thursday.

On the eastern front, fighting continued as both sides try to gain control of the oil town of Brega.

“All of Alargop is now free, liberated,” Musa Mahmoud al-Mughrabi, the rebel spokesman, said of the area 6km south of Brega.

“Casualties have been very high because it’s urban warfare,” he said.

About 40 rebels have been killed and nearly 100 wounded in and around Brega over the past 10 days, according to a tally of reports from the rebels and hospital workers.

Aided by NATO bombers, assault helicopters and a naval blockade, the rebels have transformed the battle in the last few days after many weeks of stalemate.

The US also deployed two more Predator drones for surveillance operations over Libya, a US official said on Wednesday. It was unclear how many drones the US already had over the country. 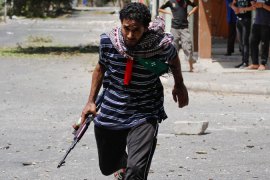 Opposition says its forces have reached Al-Heisha and captured two towns on supply roads in campaign to isolate capital. 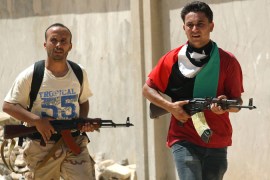 Rebels advance in their fight for Az Zawiyah 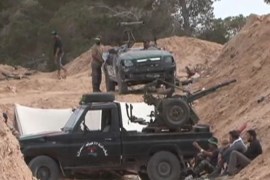 As struggle to depose Muammar Gaddafi’s regime intensifies, so does the debate over Libya’s future. 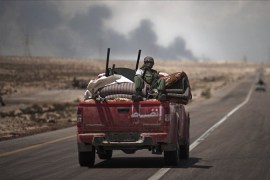 Missile launch against rebels marks first use of a ballistic weapon by Libyan troops since conflict began in March.