International pressure continues to increase on Bashar al-Assad, president of Syria, with the United States calling for his resignation and the United Nations claiming Syria’s use of force against anti-government protests may constitute crimes against humanity.

In a written statement on Thursday, President Barack Obama said: “The future of Syria must be determined by its people, but President Bashar al-Assad is standing in their way … For the sake of the Syrian people, the time has come for President Assad to step aside.”

Obama said the US “cannot and will not impose this transition upon Syria” but will support “an effort to bring about a Syria that is democratic, just, and inclusive for all Syrians. We will support this outcome by pressuring President Assad to get out of the way of this transition”.

Obama said Syrians “have spoken with their peaceful marches” and that the Syrian government “has responded with a sustained onslaught”.

“I strongly condemn this brutality, including the disgraceful attacks on Syrian civilians in cities like Hama and Deir ez-Zor, and the arrests of opposition figures who have been denied justice and subjected to torture at the hands of the regime,” the president’s statement said.

Secretary of State Hillary Clinton later addressed the worsening situation in Syria in a televised address, announcing a new round on US sanctions to target Syria’s energy sector.

“These actions strike at the heart of the regime by banning American imports of Syrian petroleum and petroleum products and prohibiting Americans from dealing in these products,” she said.

Clinton expressed hope other members of the international community would “amplify” the US action by stepping up their pressure on Syria’s leadership “in word and action”.

Syria is not a huge source of oil for the US, but if European allies join the effort, it could significantly affect
one of the government’s top sources of revenue. Syrian crude oil exports go mostly to European countries such as Germany, Italy, and France, according to the US Energy Information Agency.

Shortly after Obama issued his statement, the European Union also called for Assad to step down and warned of further sanctions.

“The EU notes the complete loss of Bashar al-Assad’s legitimacy in the eyes of the Syrian people and the necessity for him to step aside,” the EU’s foreign policy chief, Catherine Ashton, said in a statement.

Separately, the leaders of the UK, France and Germany issued a joint statement urging Assad to leave.

“We call on him to draw the consequences of the total rejection of his regime by the Syrian people and to leave power, for the greater interest of Syria and the unity of his people,” they said.

Responding to the calls for Assad to leave, Reem Haddad, the information ministry’s director of external relations, criticised the US and other governments for meddling.

“It is strange that instead of offering [Damascus] a helping hand to implement its programme of reforms, the West and Obama are seeking to stoke more violence in Syria,” Haddad told the AFP news agency.

The UN Security Council met behind closed doors to discuss Syria on Thursday.

Earlier in the day, a high-level UN human rights team said Syria’s leadership could be referred to the International Criminal Court in The Hague. A UN investigative team said it had compiled evidence implicating 50 people at various levels of
government who could be prosecuted.

“The mission found a pattern of human rights violations that constitutes widespread or systematic attacks against the civilian population, which may amount to crimes against humanity,” it said.

The team, which was not allowed into Syria, interviewed victims and witnesses in the region from mid-March to mid-July.

Syrian forces had fired on peaceful protesters throughout the country, often at short range and without warning, killing at least 1,900 civilians, including children, investigators said in a report. Their wounds were “consistent with an apparent shoot-to-kill policy”, it said.

Syrian authorities, in a letter to the UN investigators, said that the death toll of 1,900 people was correct, but said it included police and security officers, according to the report.

Protesters took to the streets across Syria on Thursday night, including in the eastern city of Deir ez-Zor and several towns in Deraa governorate in the south.

Earlier in the day, activists said the Syrian army continued its crackdown in several cities despite claims by the Assad government that military and police operations against protesters had stopped.

Rights group Avaaz said there been fresh attacks on civilians in Latakia at 2pm local time on Thursday, with regime forces claiming to crack down on “terrorist gangs” in the Palestinian camp of al-Ramel.

Avaaz said security forces were shelling the minaret of the Palestine Mosque in the camp and that heavy machine gun fire had been reported on houses in the nearby Yafa neighbourhood.

At night, the UK-based Syrian Observatory for Human Rights said soldiers and members of the security forces took up positions in the town of Zabadani outside Damascus and in some of the capital’s suburbs.

Switzerland said earlier on Thursday it was recalling its ambassador to Syria in protest of the violence perpetrated by security forces against civilians.

“The actions of the Syrian security forces are not acceptable,” the Swiss Federal Department of Foreign Affairs said in a statement.

Meanwhile, Jordan’s foreign minister said his country was “angered” and “extremely worried” by the killings of civilians in Syria.

A day earlier, Tunisia recalled its ambassador from Syria, following the lead of several Gulf states.

Assad’s government has defied international calls for an end to the crackdown, saying it is battling “armed terrorist gangs”, not a peaceful opposition.

In recent comments carried on the state-run news agency, Assad told members of the ruling Baath Party that Syria would not give up its “dignity and sovereignty”.

According to activists, Assad has unleashed tanks, infantry, snipers and warships in an attempt to retake rebellious areas.

But Al Jazeera’s Nisreen El-Shamayleh, reporting from the Jordanian side of the Syria-Jordan border, said activists told her they would continue protests despite the violence.

“Organisers have just announced that they have formed a high commission for leading the revolution in Syria,” she said.

“They don’t think that the crackdown is over, and they certainly aren’t interested in any of the reforms Assad says he’s going to carry out because what they demand is a government change. That means him leaving.”

Samir al-Nashar, a Syrian opposition activist, told Al Jazeera: “President Bashar al-Assad is no longer enjoying any support in the country, except the military and the presidency people in Syria.

“Syria now is on the verge of a historic change and Syria will move to a democratic regime during which the choice and the decision lies with the Syrian people.”

The government’s assault has escalated dramatically since the start of the Muslim fasting month of Ramadan in August, with hundreds reported killed and thousands arrested. 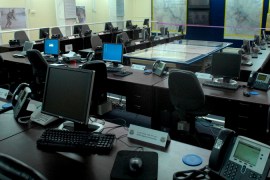 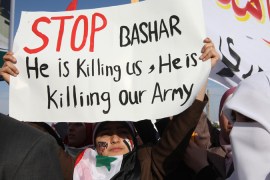