Fierce fighting between rebels and Muammar Gaddafi loyalists has broken out at Libya’s only functioning oil refinery in the western city of Az Zawiyah.

The clashes on Wednesday are part of the rebels’ push to cut fuel supplies to the regime’s stronghold in Tripoli, the capital.

A rebel field commander in Az Zawiyah, Osama Arusi, said the fighting had shut down an oil pipeline to Tripoli and that rebels have surrounded the refinery.

“The pipeline from Az Zawiyah to Tripoli has been switched off,” Arusi told the Associated Press news agency. “The man who is responsible for switching the pipeline off said it is not working.”

Analysts said the capture of the 120,000-barrel-per-day refinery in Az Zawiyah would not have a major impact on Gaddafi’s ability to secure fuel.

The flow of crude oil to the refinery from fields in the southwest of Libya had largely been halted since midsummer. The refinery was believed to be running at about one-third of its normal capacity, drawing mainly on reserve oil stored in its tanks.

Furthermore, Az Zawiyah mostly produced fuel oil, versus gasoline, which Gaddafi was trucking in from Tunisia and Algeria.

“In that sense, it’s more significant that they [the rebels] have got control of the roads than the refinery,” said John Hamilton, a Libya energy expert with Cross-Border Information and a contributing editor of Africa Energy.

“Strategically, that’s a more important gain for the rebels. Having control of the roads makes it much harder for Gaddafi to get the petrol he needs” from Tunisia and Algeria.

About half a mile south of the refinery, an AP reporter saw two cars carrying civilians driving away from the refinery on an otherwise deserted road. Meanwhile, three pickup trucks loaded with fighters sped towards the refinery along the same road, to reinforce the troops.

The Libyan rebels made a dramatic advance on Saturday out of their bases in the western mountains near Tunisia into Az Zawiyah, just 30 miles west of Tripoli.

They took control of parts of the city and have been slowly gaining ground ever since.

The rebels are closing in on the capital from the west and the south, while NATO controls the seas to the north of Tripoli, which sits on the Mediterranean coast.

Meanwhile, a UN envoy has arrived in neighbouring Tunisia, where sources say rebels and representatives of the government are in talks on the island resort of Djerba.

The envoy, Abdul Ilah al-Khatib, told Reuters news agency that he would meet “Libyan personalities residing in Tunisia” to discuss the conflict.

Talks could signal the endgame of a battle that has drawn in NATO and emerged as one of the deadliest confrontations in the wave of unrest sweeping the Arab world.

But UN spokesman Farhan Haq said the world body had “no concrete information” on any talks in Tunisia and that its Libya envoy, al-Khatib, was not taking part in any such meetings.

The reports of rebel-government talks also sparked a swift denial from Gaddafi’s government. His spokesman dismissed reports of negotiations about the Libyan leader’s future as part of a “media war” against him.

“The leader is here in Libya, fighting for the freedom of our nation. He will not leave Libya,” spokesman Moussa Ibrahim said.

Abdul Hafez Ghoga, vice-chairman of the National Transitional Council (NTC), also denied that such talks were under way.

Gaddafi forces fired a scud missile near the city of Brega on Sunday, marking the first use of it since the uprising against his rule began six months ago.

Although no one was hurt in the attack, Richard Weitz, director of the Centre for Political and Military Analysis at the Hudson Institute, told Al Jazeera that the use of scuds could signal Gaddafi’s determination to fight. 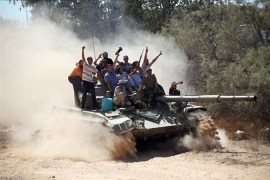 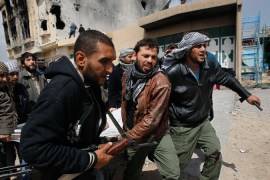 Who is in control of the Libyan opposition?

We ask if the murder of rebel military commander General Abdel Fatah Younis reflects divisions in the anti-Gaddafi camp. 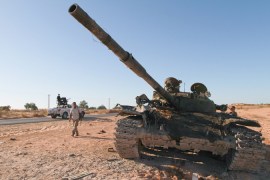 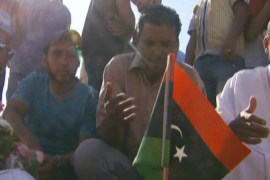 More than three weeks after key rebel general’s murder, investigation has yet to yield results.