Rick Perry, the Texas governor, has declared himself a candidate for US president, shaking up the race for the Republican nomination.

Perry told South Carolina voters in a conference call on Saturday that he wants to win his party’s nomination and take on Democratic President Barack Obama.

His decision comes as fellow Republican candidates face their test of public opinion in an Iowa straw poll.

“It is time to get America working again,” Perry said in a statement.

“That’s why with the support of my family and an unwavering belief in the goodness of America, I declare to you today my candidacy for president of the United States.”

“I realise that the United States of America really is the last great hope of mankind,” Perry said, as he criticised Obama for “disastrous economic policies”.

Delivering a speech to about 700 conservative activists in South Carolina, Perry, 61, touted his job creation record in Texas and promised to reduce taxes, business regulations and the overall role of government in people’s lives.

He said leaders in Washington have lacked courage and Obama’s policies have “prolonged our national misery, not alleviated it”.

“Mr President, let us tell you something. You cannot win the future by selling America off to foreign creditors. We cannot afford four more years of this rudderless leadership,” Perry said.

“Our president has insulted our friends and he’s encouraged our enemies, thumbing his nose at traditional allies like Israel,” he said.

The three-term Texas governor is an opponent of abortion rights and gay marriage, and is considered a strong fund-raiser.

The announcement by Perry, who has made his deep Christian faith a big part of his public image, came one week after he led a seven-hour religious rally in Houston to pray for America, a nation he described as “in crisis”.

Perry, who caused a stir in 2009 when he openly pondered his state’s secession from the United States, was sharply critical of what he called an overbearing federal government.

“As Americans we realise that there is no taxpayer money that wasn’t first earned by the sweat and toil of one of our citizens,” he said.

“That’s why we reject this president’s unbridled fixation on taking more money out of wallets and pocketbooks of American families and employers and giving it to a central government,” he said.

Six Republican presidential hopefuls battled for votes in the straw poll, the first big test of the 2012 campaign.

Voters swarmed the poll site and lined up early to cast a ballot in Iowa’s nonbinding mock election that is traditionally an early gauge of strength in the state that holds the first Republican nominating contest next year.

Perry is not on the poll ballot and Romney skipped the event, but six other Republicans pleaded for support from voters who rolled into the site in dozens of buses and jammed candidate tents for music and free barbecue.

Supporters of libertarian Ron Paul swarmed the arena floor as Paul spoke, while Bachmann exhorted her supporters to follow her straight to the voting booth.

Al Jazeera’s Kimberly Halkett, tracking the poll in Ames, Iowa, said the poll is not an accurate reflection of who might ultimately go on to win the nomination but what it does is that it shows who is at the front of the pack.

“It translates into critical political campaign donations. A lot of political donors watch this poll results very carefully, and they want to see who they believe will have enough momentum to keep on going and then they throw their support behind.

“In fact, in the last five polls since 1979, just two times the winner of straw poll have gone on to win republican nomination.” 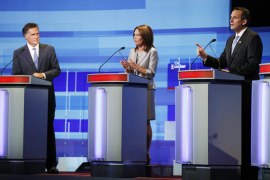 Candidates lash out at President Obama and each other as Texas’ Rick Perry enters race and Sarah Palin stirs talk. 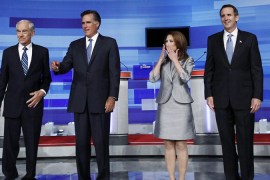 Battle for US presidency starts in Iowa 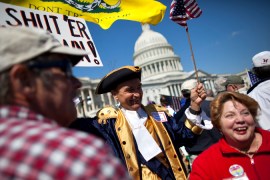 According to author, Democrats need to realise you can’t use reason to fight insanity.