Sebastian Pinera, the president of Chile, has issued strong words to student protesters who have staged mass demonstrations to demand government-funded education, telling them “someone has to pay”.

“We all want education, healthcare, and many more things for free, but I want to remind them that nothing is free in this life. Someone has to pay,” said Pinera on Thursday.

He was speaking at a ceremony to sign an education bill meant to appease the student groups that again clashed with police in Santiago on Thursday.

Pinera said the bill will give the government more budgetary and supervisory control over municipal schools, but he brushed aside suggestions that there could be free education for all in Chile.

“If we give free education to 10 per cent of the most favoured in society, what we would be doing is taxing all of society, including the poor, to finance the education for the lucky ones,” he said.

A free public education system for all has been the main demand of protesters since Pinera announced plans two months ago to cut spending on education.

The protest movement, which has attracted widespread public support, has knocked Pinera’s popularity to 26 per cent.

Unions representing public workers and copper miners announced they would join the students, a sign of broadening opposition to Pinera, Chile’s first conservative president since the end of the dictatorship of general Augusto Pinochet in 1990, the AFP news agency reported.

Even as the bill was being signed, police used water cannon in clashes against students who continued their protest in Santiago.

Students from the Metropolitan Technological University on Thursday set up a flaming street barricade, according to Santiago’s Emol newspaper.

When special police forces arrived, the students reportedly ducked into a university building and threw petrol bombs, stones and other objects at police, who responded with a vehicle-mounted water cannon.

Students also took over a high school in Santiago for two days, blocking the school’s entrance with chairs and desks, until police cleared them out with tear gas and water cannons.

La Tercera, another local newspaper, reported on Thursday that the heads of the Senate and Chamber of Deputies were in talks with representatives of the student movement.

The clashes come a day after the city’s fifth major protest in the capital, where tens of thousands of teachers, students, parents and community members took to the streets to demand education reforms.

Among the students’ demands are a state takeover of the public school system, which is currently run by local authorities, causing, according to protesters, deep inequalities in educational access.

The current system also leaves underfunded municipalities in charge of high school education nationwide.
This has starved most schools of resources, while leaving some wealthy neighbourhood schools well off. Chile’s small upper class sends its children to private schools or overseas for schooling.

Of particular concern is that private universities enjoying nonprofit tax status are not reinvesting their revenues in educational improvements as required by law.

“The government is not listening to us, we want a new education system in Chile and the government proposals do not address what we want,” said Manuel Soto, a protester from the University of Santiago.

“The protests will continue … until the government gives us better education.”

Chile has the highest per capita income of any country in South America, but the most disproportionate income disparity in the region. 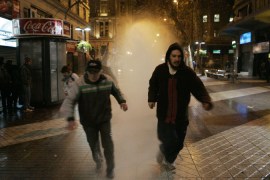 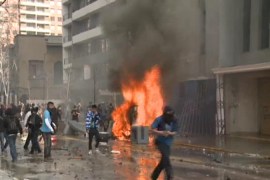 Protesters arguing system is driven by profit rather than learning, clash with police. 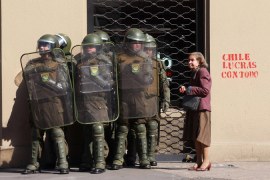 In Pictures: Students protest in Chile

Tens of thousands of students take to the streets, demanding reforms in country’s education system.