An Indonesian alleged to have made the explosives used in the 2002 Bali bombings has been extradited to Jakarta, more than six months after he was captured in northwest Pakistan.

Umar Patek had a $1 million bounty on his head when authorities caught up with him on January 25 in Abbottabad, the same town where Osama bin Laden was killed in a US raid four months later.

The head of Indonesia’s anti-terrorism agency, Ansyaad Mbai, told the Associated Press that it was no coincidence that Patek had turned up in Abbottabad.

“Patek was very valuable for the US,” he said on Wednesday, hours before the 41-year-old boarded an Indonesian plane sent to a Pakistani air force base just outside Islamabad.

Security analysts also say Patek is one of the few Indonesian extremists who would be able to explain to authorities the connections and extent of cooperation between armed radical groups in Asia.

Patek was reported to have been injured during the shootout with the security forces that resulted in his arrest.

Indonesian officials say Patek has confessed to playing a key role in the 2002 Bali bombings, which killed 202 people, many of them foreign tourists, including 88 Australians.

He also admitted to making the bombs used in a string of Christmas Eve attacks on churches in 2000 that claimed 19 lives, they say.

Mbai said Patek has valuable intelligence about al-Qaeda and links with its Southeast Asia affiliate, Jemaah Islamiyah, blamed for the Bali bombings and all other major attacks in Indonesia. Patek is one of the most senior suspects to have been captured alive.

In November 2008, thousands of people have gathered for the funerals of Imam Samudra, Amrozi Nurhasyim and Huda bin Abdul Haq who were executed by the Indonesian government for their role in the Bali bombing.

Al Jazeera’s Step Vaessen, reporting from one of the funerals, said at the time that there were relatively few disturbances.

“There were fears of revenge attacks, but there have not been any serious attacks in Indonesia for a long time, and the government has cracked down on militant groups.” 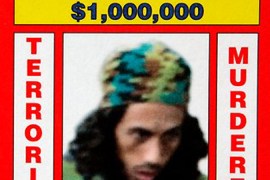 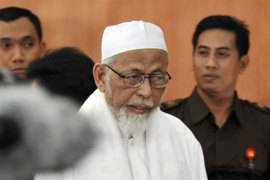 Co-founder of Jemaah Islamiyah proclaims innocence over terror charges and rejects trial as outside Islamic law. 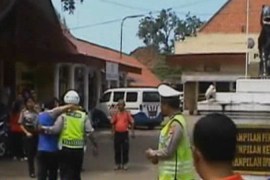 Suspected suicide attacker killed and at least 17 others injured at a mosque in a police compound, police say. 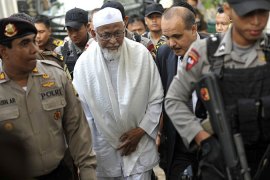 Controversial cleric found guilty of helping to organise and fund a camp for Islamist fighters in Aceh province.