The Syrian Observatory for Human Rights (SOHR) said at least one woman was killed and 13 people injured on Wednesday when 12 tanks and armoured vehicles, entered the towns of Taftanaz and Sermin, around 30km from the border with Turkey.

In Homs at least 16 people have been killed by security forces, reports from activists said.

Omer Onhon, the Turkish ambassador, visited Hama on Wednesday and said that tanks were moving out of the city ten days after the army stormed in.

Forty personnel carriers decked with Syrian flags rolled out of Hama with soldiers chanting slogans praising embattled Assad, said a journalist from the AFP news agency who visited the city on a tour organised by the authorities.

However, witnesses told Al Jazeera that after Onhon’s visit to Hama, where he was told military operations had ended, Syrian army forces moved back into the town.

Syrian troops also seized control of the eastern flashpoint city of Deir ez-Zor on Wednesday following intense shelling and gunfire, an activist said. The city has been under attack by Assad’s forces for four days.

“They are shooting anything that moves,” the activist said, speaking to the AP news agency by telephone on condition of anonymity for fear of reprisals.

“The situation is terrible. Bakeries and pharmacies are closed, while food and baby formula are scarce.”

In the town of Albukamal, located in the province of Deir ez-Zor, the security forces and members of the Shabiha armed group carried out a campaign of mass arrests early Wednesday morning, detaining at least 35 people, Avaaz, an international human rights organisation, said.

With the situation growing bleaker in the country, the international community has stepped up pressure on Assad.

Envoys from India, Brazil and South Africa were due in Damascus on Wednesday and were expected to have held talks with Walid al-Muallem, the foreign minister.

The US Department of Treasury issued sanctions on the commercial bank of Syria, and its Lebanon-based subsidiary, as well as Syriatel, the largest mobile phone operator.

“We are all watching with horror what he [Assad] is doing to his own people,” Jay Carney, White House spokesperson said on Wednesday.

On Tuesday, Ahmet Davutoglu, Turkey’s foreign minister, urged Assad to end the killings, while US officials said the Obama administration was preparing to explicitly demand his departure.

Assad has largely shrugged off the pressure.

Syria’s state-run news agency said he told Davutoglu the government will relentlessly fight “terrorist groups” – a term Syrian authorities often use for government opponents even though most of those killed are said to be unarmed, peaceful protesters.

Rights groups say about 1,700 people have been killed since March, and an aggressive new military campaign that began a week ago has killed several hundred. 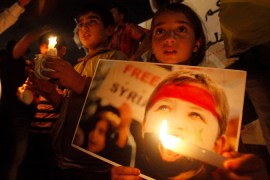 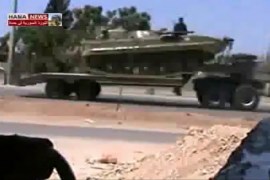