Six people were reported killed in Hama on Monday amid shelling by army tanks, with two more killed in Al-Bukamal and Deir ez-Zoor in the east.

Residents of Hama say the military resumed indiscriminate shelling and firing as residents were breaking their daily dawn-to-dusk fast on the first day of the Muslim fasting month of Ramadan.

The latest deaths bring the number of people killed since Sunday to at least 150.

“Military forces stormed the city from the west side and 25 people are killed and more than 65 injured,” the witness said.

“Artillery and anti-aircraft weapons are being used. The situation in the city is very bad, and medical and food supplies are low.”

Deir ez-Zor, Syria’s main gas and oil-production hub in the east, has become a rallying point for protests along with Hama.

Activist group Avaaz cited unconfirmed reports on Monday that the resort town of Zabadani near the Lebanese border was also under seige by the army.

They said the military had surrounded the area and was preventing people from entering or exiting the area with checkpoints throughout the town.

Russia, Syria’s key European ally, urged Damascus on Monday to immediately stop the use of force and repression against civilian protesters, in its strongest criticism yet of the government’s crackdown on demonstrations.

The foreign ministry in a statement expressed “serious concern” over Sunday’s violence.

“The use of force against both peaceful civilians and representatives of state structures is unacceptable and should be stopped immediately,” the foreign ministry said.

“We are calling on the Syrian government and the opposition to demonstrate the utmost restraint, renounce provocations and repressions and observe the rule of law and respect for international human law.”

Sergei Strokan, political editor at the online newspaper Kommersant, told Al Jazeera the statement was “the most strong-worded criticism [of Syria] ever voiced by Russian officials, but it is carefully worded”.

“Russia found itself in quite a difficult position after this crackdown,” Strokan said.

“The recent developments in Syria have deepened our already existing concerns,” Gul said. “The footage from yesterday’s events has horrified us.”

The European Union also condemned the latest violence and expanded its sanctions against Syria on Monday, imposing asset freezes and travel bans against five more military and government officials.

The EU decision brings the number of individuals targeted by the EU to 35, including President Bashar Assad.

Four government entities are also on the list. The EU said it would release the names of the new additions to the list on Tuesday.

EU foreign policy chief Catherine Ashton said, “I wish to remind the Syrian authorities of their responsibility to
protect the population.

“The brutal violence creates a serious risk of escalating tension and factional divisions and is not consistent with broad reforms.”

Sunday’s attack on Hama was one of the “deadliest days” since the protests erupted, Rami Abdel Rahman, the head of the Britain-based Syrian Observatory for Human Rights, said.

Death tolls provided by the observatory and other human rights groups showed at least 142 people were killed across Syria on Sunday, with at least 100 of them in Hama.

“The number of those wounded is huge and hospitals cannot cope, particularly because we lack the adequate equipment,” Abdel Rahman quoted a Hama hospital source as saying.

He said the crackdown on Hama came after more than 500,000 people rallied in the city on Friday following Muslim prayers during which a cleric told the congregation “the regime must go”.

Ban Ki-moon, the UN secretary-general, called for an end to the violence and reminded Syrian authorities that “they are accountable under international human rights law for all acts of violence perpetrated by them against the civilian population”.

Germany’s UN Mission said late on Sunday it had asked for a Security Council meeting on Syria and expected consultations to be held on Monday afternoon.

The Syrian authorities have consistently accused “armed gangs” and fundamentalist Salafi Muslims of stirring the unrest and aiming to sow chaos in the Sunni-majority country.

Residents in Hama said the army entered the city with tanks early on Sunday before gunfire erupted, in an apparent operation to wrest back control after security forces withdrew almost two months ago.

Syria has banned most foreign media and restricted coverage, making it difficult to confirm events on the ground.

But interviews with witnesses, protesters and activists painted a grim picture on Sunday of indiscriminate shelling and sniper fire as residents fought back by erecting barricades and throwing firebombs at their assailants.

SANA said the gunmen torched police stations and attacked private and public property in Hama, adding that soldiers tore down barricades and checkpoints set up by the armed men at the city’s entrance.

In 1982, an estimated 20,000 people were killed in Hama when the army put down an Islamist revolt against the rule of Assad’s late father, Hafez.

Earlier this month, the president replaced the governor of Hama after a record 500,000 protesters rallied in the opposition bastion on July 1, calling for the fall of the regime.

The US and France enraged the government earlier this month when their ambassadors travelled to Hama in a trip to demonstrate solidarity with demonstrators.

At least 1,583 civilians and 369 members of the army and security forces have been killed since mid-March in Syria, according to the observatory. 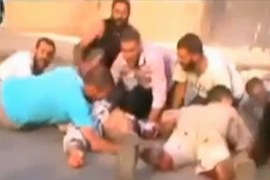 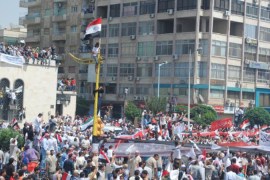 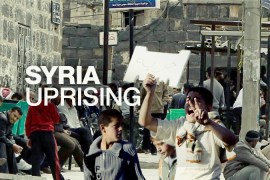 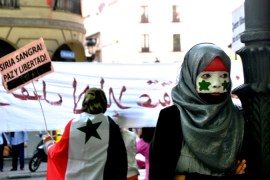 Living in Spain and fighting for Syria

Spain’s Syrian community, influenced by the 15-M Movement and the Arab Spring, have begun a movement of their own.