Juba, South Sudan — After decades of conflict and millions of deaths, South Sudan formally marked its independence on Saturday.

Tens of thousands of people turned out for the ceremony at the mausoleum of John Garang, the longtime leader of the Sudan People’s Liberation Movement (SPLM). The area started to fill shortly after daybreak, when crowds of people raced into the dusty venue to secure a space near the stage.

“We have resolved to overcome the past and face the future with a renewed sense of purpose, and it has stirred a forgiveness and reconciliation,” Igga said.

Many of the people assembled for Saturday’s ceremony could not actually hear the speeches from Igga and other dignitaries; the sound system did not carry that far. Few seemed to mind.

“I am just happy that they are here,” said Helen Garang, referring to the dozens of dignitaries on the stage.

Saturday’s formal occasion was more subdued, perhaps partly because of the beating sun, which caused several people in the crowd to faint. Again, though, few people seemed to mind.

“It is our happiness day,” said Rayana Gracias, fanning herself in the heat. “We were oppressed and now we are separate from those people, so we can have the rights we want… we want this to be a Christian country.”

An estimated 2.5 million people were killed in decades of civil war between Khartoum and southern rebels. Southerners have long complained of neglect at the hands of the northern government; most of the country’s oil wealth went to develop the north, and Khartoum imposed various forms of Islamic law on the predominantly Christian and animist south.

“This is what we fought for!” one man yelled, leading a march of several dozen people into the mausoleum. “Remember our martyrs. They did not die in vain.”

Salva Kiir, the president of South Sudan, stood next to his longtime foe, Sudanese president Omar al-Bashir, and gave his first speech as the head of the new state.

Kiir’s speech was jubilant, as expected, but he was also realistic about the challenges facing South Sudan, one of the poorest states in the world.

“This republic is at the tail end of economic development,” Kiir said. “On all indexes of human welfare it is at the bottom of all humanity.”

Kiir acknowledged that the southern government has “not delivered basic services” over the last six years, and that the gap has often been filled by the United Nations and international aid agencies working in Juba.

Those shortcomings are readily evident in Juba, where education, public health and other services are scarcely available. The International Crisis Group has called the government’s progress on economic development “minimal”; the state’s presence is often “imperceptible”, the group wrote in a May report.

Kiir also called for a “new beginning of tolerance” in South Sudan, home to hundreds of different ethnic groups.

The legacy of civil war certainly continues to haunt many people in the new state. “We are tired of war,” was a common sentiment in interviews on Saturday.

Some seemed almost worried that their newfound peace would be taken away: “We do not want to go back to war,” one woman said. “Please, let us be peaceful.”

‘We want it to succeed’

There was some doubt earlier this week about whether Bashir would actually attend the ceremony, but he did, and delivered a conciliatory address in which he linked South Sudan’s stability to his own nation’s. 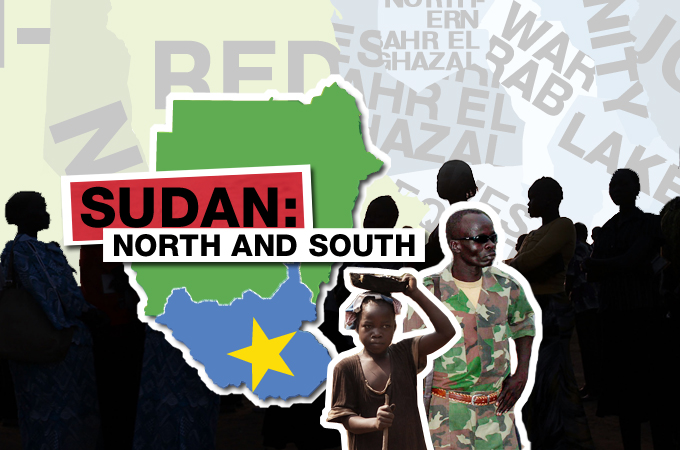 “We want it to succeed… its success will be our success,” Bashir said. “It is our joint responsibility to continue building confidence to complete the agreement,” referring to the Comprehensive Peace Agreement (CPA), the 2005 deal aimed at ending decades of civil war.

Bashir said he had no choice but to respect the results of January’s independence referendum, in which nearly 99 per cent of South Sudanese voted to secede from the north. “The will of the people of the south must be respected,” he said.

His tone contrasted somewhat with an aggressive speech he delivered in White Nile state, in northern Sudan, just two days ago. Bashir accused the SPLM of “betrayal” in Sudan’s South Kordofan state and said he would not negotiate with the movement.

Fighting has flared in South Kordofan in recent weeks, where Bashir’s army has bombed rebel groups which have refused to disarm. Aid workers in Juba say that tens of thousands of civilians have fled the fighting, with many of them crowding into refugee camps in the south.

Bashir also urged US President Barack Obama to lift its economic sanctions on Sudan. The US state department suggested last year that it would lift those sanctions, and remove Sudan’s “state sponsor of terrorism” designation, if the independence referendum went ahead successfully.

Several other delegates – representing the European Union, the United Kingdom, the United States, China and other parties – also delivered speeches on Saturday.

Jiang Weixin, China’s special envoy at the ceremony, praised both sides for “turning swords into ploughshares” and ending the civil war. Susan Rice, the United States ambassador to the UN, called Saturday a “day of triumph” and promised American support for South Sudan.

And William Hague, the British foreign secretary, announced a new embassy in Juba – it opened on Saturday – and a new ambassador as well. (China, too, has already established an embassy.)

Ban Ki-moon, the UN secretary-general, said the UN general assembly would “move swiftly” to give South Sudan full membership. He praised the split as the moment when a “longstanding conflict [was] being ended.”

Ban also urged both governments to resolve the status of “disputed areas” on the border between north and south.

“The referendum in Abyei has yet to take place,” he said. “People in South Kordofan and Blue Nile states have not been engaged in popular consultations… and there has been recent violence perpetuated by aimless rhetoric.”

The CPA mandates a referendum on Abyei’s status – whether it will stay in Sudan or join South Sudan – and ill-defined “popular consultations” in the other two states.

South Kordofan is home to the most productive oil fields in Sudan, and Abyei – while not as oil-rich as it once was – contains a great deal of fertile farmland.

Kiir told residents of those areas that his government “[has] not forgotten you,” and promised to pursue a “just peace for all” in cooperation with Khartoum.

Oil is another issue to be resolved between Khartoum and Juba: Some three-quarters of Sudanese oil is located in the south, but all the refinery and shipping facilities are in the north. Both sides will likely spend the next few months negotiating a deal to share oil revenues.