Abhisit Vejjajiva, the Thai prime minister, has decided to step down as leader of his Democrat party, a day after its loss to the opposition Pheu Thai party led by Yingluck Shinawatra.

The Democrats, led by the 46-year-old British-born, Oxford-educated Abhisit, won just 160 seats in the 500-seat parliament, compared with Pheu Thai’s 265, according to the latest projection from the Election Commission.

“As the election results came out with the party winning fewer votes and fewer seats than in the 2007 poll, and in the spirit of a good leader of an organisation, I should take responsibility,” Abhisit said on Monday.

“I therefore have decided to resign from the party leadership.”

He said the Democrats will hold a general meeting within 90 days to choose a successor.

“I don’t want to say it is victory for me and the Pheu Thai party but people are giving me a chance and I will work to my best ability for the people,” she said in a late night victory speech on Sunday at her party headquarters in Bangkok.

Yingluck, sister of Thaksin Shinawatra, the self-exiled former prime minister, said she was working on building a coalition.

“There’s still a lot of work to be done in the future, in terms of the well-being of the people and for the country’s unity and reconciliation,” she said.

Sunday’s vote was the first major electoral test for the Thai government since mass opposition rallies in Bangkok last year, which sparked a military crackdown that left at least 91 people dead.

Thaksin, who has lived in exile in Dubai since being ousted by the military on charges of corruption in a 2006 coup, remains hugely popular among the country’s poor. The elite, however, are wary of him.

In an interview broadcast on Thai television, Thaksin praised the outcome of Sunday’s elections, thanking voters for supporting his sister.

“People are tired of a standstill … They want to see change in a peaceful manner,” he told reporters in Dubai on Monday.

Thaksin also denied immediate plans to return home after his sister’s landslide win, calling it “not a major concern” nor “a priority”.

“The top priority is to bring back reconciliation,” he said in the interview.

Supong Limtanakool, chairman of the Centre for Strategic Studies at Bangkok University, told Al Jazeera that while Yingluck’s victory was not surprising, the substantial margin by which she won was.

Supong said Abhisit’s loss could, in part, be attributed to a cooking oil shortage and high food prices.

The government’s apparent indifference to the plight of Thais during recent natural disasters had also helped to cost him support.

“[Populations affected by flooding] have never seen any government representative going to visit them or to see what they can do [for] the people,” Supong explained. 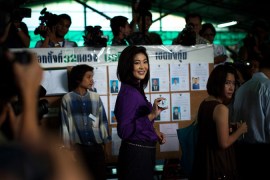 Thailand elects the country’s first female prime minister in an election which divided the country. 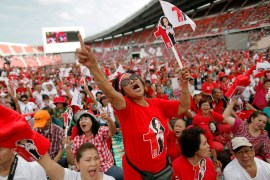 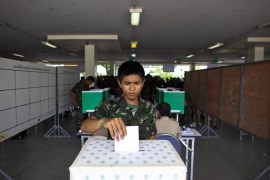 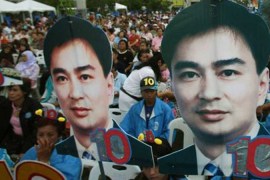