More than 1,500 women whose husbands have disappeared but have not yet been declared deceased are in a precarious and dangerous position in Indian-administered Kashmir, according to a new report.

The 48-page report titled “Half Widow, Half Wife” released on Thursday by the Association of Parents of Disappeared Persons (APDP), argues that although “direct violence is disproportionately inflicted on males” in Kashmir, women and children whose husbands or fathers “disappear” are caught in a legal conundrum that does little to compensate or protect them.

The report says that the fact that the men have disappeared and have not been declared dead, has left thousands of women, known as “half-widows”, and their children in a precarious state, with little legal protection, rendering many desperate and homeless and paving the way for abuse and exploitation.

The story of the half-widows of Kashmir “captures the unseen and pernicious face of insecurity in Kashmir”, the report says.

An estimated 8,000 people have disappeared in Kashmir since the insurgency against Indian rule began in 1989, although the Indian government says the number of those “missing” is most likely closer to 3,000 to 4,000.

Local civil society and international human rights organisations dispute this claim and say that these men were abducted by Indian security forces and were either detained indefinitely or disposed of.

The Indian government’s refusal to officially recognise enforced disappearances in Kashmir has left families in perpetual limbo, promulgating stress and psychological trauma for parents, spouses and children, the report says.

But for the “half-widows” it is particularly difficult.

The report says that based on their insecure position of being “single”, yet still legally married, the “half-widows” are unable to access the family estate or ration cards. Even the ex-gratia relief and compassionate appointment created by the Indian government can only be accessed with a death certificate and that too only if it is proven that the deceased had no link with militancy.

Ex-gratia relief can only be accessed by “half-widows” after a period of seven years has passed and only when the case is passed through a local screening committee.

The report says that the committee is usually made up of police officers and those from government bureaucracy, thereby undermining the process.

“Most legal remedies remain elusive due to the severe financial and emotional costs over multiple year timelines,” the report notes, adding that “administrative remedies fall short of providing due relief to half-widows”.

But it is not just the state that places “roadblocks” in the way of the “half-widows”.

“Half-widows” are undefined legally and within the patriarchal socio-cultural context of South Asia, the women find themselves at the mercy of Kashmiri society, where a deafening silence surrounds gender violence and abuse.

In rural Kashmir, with fewer economic opportunities, “half-widows” are at a greater risk of suffering manipulation by government officials and even community leaders.

Adding to the confusion is the continued dispute over what is the minimum time needed to dissolve a marriage and allow a “half-widow” to move on with her life and possibly remarry according to Islamic law.

One school suggests four to seven years, but others suggest that a “half-widow” is expected to wait up to 90 years before remarrying.

Responding to the report, Govind Acharya from Amnesty International, told Al Jazeera that the most important aspect of the report is noting the “sheer volume of hardship that the ‘half-widows’ face above and beyond having to deal with the disappearance of their spouse”.

“The report is incredibly useful in linking the past with the present and future. In other words, it’s not just about the mourning of a lost loved one, but it’s about the deprivation that resulted from that loss till today because of government inaction.

“And, it’s about the future of Kashmir. If Kashmir cannot reconcile with the past then what kind of future will it face?”

Omar Abdullah, the chief minister of Jammu and Kashmir, could not be reached for immediate comment.

Khurram Parvez, the programme co-ordinator from the Jammu and Kashmir Coalition of Civil Society (JKCCS), says that the most surprising finding of the report was the inaction of the state to the crisis.

“They [state authorities] have not moved, even years after the tragedies, which have ruined the past, present and future of so many families.

“The daily struggles of existence and seeking justice unabated, by these women have created examples of unflinching courage,” Parvez said.

The report comes a day after India and Pakistan held peace talks in New Delhi for the first time since resuming bilateral talks this year.

Somanahalli Mallaiah Krishna, India’s foreign minister, and his Pakistani counterpart, Hina Rabbani Khar, held talks on Wednesday and spoke of entering a new era in relations, agreeing to work together to end the insurgency, to ease commerce and open travel across the Line of Control, dividing Indian-administered and Pakistan-administered Kashmir.

Kashmir: Back on the agenda?

Indian newspapers were a little more reserved, with The Hindu editorial suggesting that the “talks broke no ground” and the “Kashmir-related confidence building measures announced by the two sides is meagre”.

A Tehelka magazine article asking “Was it a successful diplomatic visit at all?” comments that “Pakistan foreign minister avoided tricky issues and refrained from mentioning Kashmir at the brief media interaction… it was left to Krishna to mention Pakistan’s core concern”.

Acharya said that the timing of the report could not have been any better.

“It sheds light on the past human rights violations and links them to the present. I have said that already, but I just wanted to reiterate that without the APDP and other groups campaigning [for] justice for the victims of the disappearances, then they will be forgotten by everyone (except the family members of course).”

But Acharya fears that the outcome of India-Pakistan talks will have little impact on human rights in Kashmir. He says that while Pakistani citizens have expressed concern for Kashmiri human rights, it is difficult to believe that the Pakistani government shares that sentiment.

“The Pakistani government obviously does not care, otherwise its actions would not have involved sending militants across the border to commit widespread human rights violations against Kashmiris.

“In fact, I would say that Pakistani involvement in Kashmiri matters has been nothing but a detriment to human rights and human rights advocacy on Kashmir.”

Parvez agrees that the prevailing talks are unlikely to end human right violations in the valley. He says that the rights of the people in Jammu and Kashmir have been held hostage by the Indian government and the talks are still about relations between India and Pakistan and not about Kashmir.

“While India and Pakistan appear keen to take confidence building measures, initiating steps to build mechanisms to protect human rights of people should have been the priority, but unfortunately everything else has been prioritised over human rights.”

Parvez says that one of the key recommendations of the report is that the Indian government repeal the draconian laws that give the armed forces impunity in Indian-administered Kashmir, including the Armed Forces Special Powers Act (AFSPA) and the Public Safety Act (PSA).

Furthermore, he says that a set of immediate recommendations calls on the government to create “a streamlined system of compensation without delays, harassment and coercion” and calls on religious scholars to reach a consensus on the minimum amount of time needed to pass before being declared a widow.

Crucially, the report calls for a special bench at the Jammu and Kashmir high court to hear cases related to the “half-widows” and for India to ratify a UN resolution on the protection of all persons from enforced disappearances.

On Tuesday evening, the Pakistani foreign minister raised eyebrows when she met with Kashmiri separatists, who oppose India’s rule in Kashmir, although Indian authorities reportedly knew the meeting was scheduled to take place and Krishna, reiterated that the two countries were determined to discuss Kashmir “with a view to finding a peaceful solution”.

The disputed Himalayan territory of Kashmir, a major source of tension that has fuelled two of three wars fought by the two neighbours since 1947, will continue to be discussed “with a view to finding a peaceful solution”, Krishna said.

Both India and Pakistan claim Kashmir. 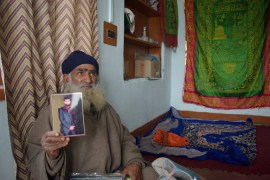 The disappeared of Kashmir

Al Jazeera reports on the boys who never came home. 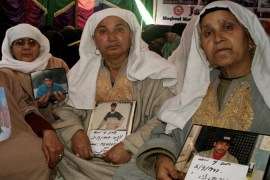 Breaking the resolve of the Kashmiri people