Police in the southwestern state of Texas have arrested a US soldier for planning what they called a “terror plot” against Fort Hood, the military base where a fellow serviceman went on a deadly shooting rampage in 2009.

Army private Naser Jason Abdo, who gave several television interviews last year saying he was opposed to deployment in Afghanistan, became the target of suspicion after a gun shop owner noticed his unusual purchases of weapons and tipped off police.

Police tracked down the 21-year-old to a motel near Fort Hood and arrested him on Wednesday afternoon, police said on Thursday. A Texas native, Abdo served at Fort Campbell in Kentucky but had deserted since July 4. He had gone AWOL since early this month after being charged with possessing child pornography.

“I would classify this as a terror plot,” Dennis Baldwin, the police chief of Killeen, Texas, located next to Fort Hood, told the AFP news agency.

“We have interviewed him and the information as a result of the interview and other leads … leads us to believe that military personnel were targeted,” Baldwin told reporters, adding that the suspect acted alone.

“I can tell you that we would probably be here today giving you a different briefing if he had not been stopped.” He called the suspect “very dangerous” and noted he had only been in Killeen for a “relatively short period of time”.

Federal charges were expected to be filed against Abdo, who “was in possession of a large quantity of
ammunition, weapons and a bomb inside a backpack” the army said in an alert sent via email and obtained by The Associated Press.

Abdo went absent without leave from Fort Campbell, Kentucky, during the July 4 weekend.

On July 3, he tried to purchase a gun at a store near the Kentucky post, according to the company that owns the store. Abdo told an AP reporter a week later that he was concerned about his safety and had considered purchasing a gun for protection, but had not yet done so.

Police in Killeen said their break in the case came from Guns Galore LLC – the same gun store where Major Nidal Hasan bought a pistol used in the 2009 attack. Store clerk Greg Ebert said the man arrived by taxi on Tuesday and bought 2.72kg of smokeless gunpowder, three boxes of gun ammunition and a magazine for a semi-automatic pistol.

Ebert said he called authorities because he and his co-workers “felt uncomfortable with his overall demeanour and the fact he didn’t know what … he was buying”.

According to the army alert obtained by the AP news agency, police learned from the taxi company that Abdo had been picked up from a local motel and had also visited an army surplus store where he paid cash for a uniform bearing Fort Hood unit patches.

The army alert said Abdo admitted upon questioning to planning an attack on Fort Hood. Officials have not offered details about a possible motive.

Baldwin, the police chief, said Abdo “was taken down rather quickly without incident”.

An FBI spokesperson said the agency would charge Abdo with possessing bomb-making components and he would be transferred from Killeen police into federal custody. Officials said there was nothing to indicate Abdo was working with others.

On Tuesday, July 12, Abdo contacted an AP reporter with whom he had spoken previously, said he had gone
AWOL and considered purchasing a gun for personal protection.

Military officials said Abdo was approved as a conscientious objector to the Iraq and Afghanistan wars, but that status was put on hold after he was charged with possessing child pornography.

Abdo said he had received critical emails about his conscientious objector case and was worried about his safety as an increasing number of soldiers were returning to Fort Campbell from Afghanistan.

An Article 32 military hearing last month had recommended that Abdo be court-martialed over military charges that 34 images of child pornography were found on a computer he used.

In addition, the military’s criminal investigation division, along with the federal Joint Terrorism Task Force, investigated Abdo earlier after he was flagged for making unspecified anti-American comments while taking a
language class, according to a US official briefed on the investigation. 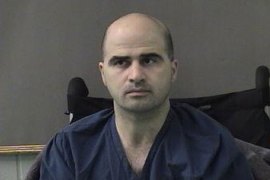 Former military psychiatrist to be tried in a military court over shooting incident in 2009 that left 13 people dead. 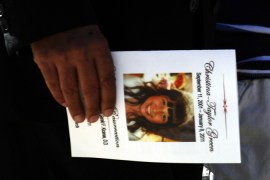 Film records behaviour of man accused of attack that killed six people and injured US congresswoman. 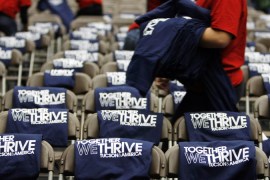 US president addresses memorial service after attack at a political event in Arizona that left six people dead.