Egypt’s parliamentary elections, a crucial step in transitioning to civilian rule, will be held in November, according to Egyptian state media reports.

In a meeting with reporters in Cairo on Saturday, Abdul Moaez Ahmed Ibrahim, the chief of the Higher Election Commission, said that the elections of both houses of the parliament will be held at the same time and fully supervised by judges.

“Whether Egyptian expatriates will be able to vote or not needs a political decision,” Ibrahim said.

No exact date for the voting has been announced.

The election commission was created on July 19 at a meeting of the supreme council of the armed forces, where it was also announced that no international observers would be allowed to monitor the vote.

He said the generals “reject anything that affects our sovereignty” and that Egyptian election monitors will observe the process instead.

The decision has been criticised by activists, who say it raises questions about the transparency of the first elections after the toppling of former President Hosni Mubarak in February.

“Egypt’s NGOs, particularly the six that were meeting today, denounced the military council’s decision to essentially pre-empt the higher electoral commission from taking a position on the issue of international observers,” he said.

“They feel the legal basis for deciding whether to accept international monitors rests solely with the higher electoral commission which is scheduled to hold its first meeting tomorrow.”

Reports of the vote schedule came a day after more than 300 people were injured in clashes between groups of armed men and pro-reform protesters marching towards Egypt’s ministry of defence in Cairo.

Thousands calling for the “downfall” of the country’s ruling military council were trying to reach the military headquarters on Saturday when they were attacked by opponents armed with knives and sticks.

Witnesses said most of the injuries occurred when civilians, believed to be thugs, standing in front of military blockades hurled barrages of stones and at least six firebombs at demonstrators. The demonstrators fought back with stones torn up from the pavement.

The clashes came a day after military police fired shots in the air and beat demonstrators blocking a main road in the Mediterranean city of Alexandria, witnesses said.

More than five months after mass street demonstrations drove Mubarak from power, many Egyptians worry that their “revolution” has stalled under the military council’s assumption of power.

Egypt’s interim rulers have reshuffled Prime Minister Essam Sharaf’s cabinet and promised to speed up trials and political reforms, but thousands kept up protests across Egypt on Friday to back demands for the policemen’s trials to be held soon.

Sharaf, in a speech after his new cabinet was sworn in on Thursday, promised to set up an anti-corruption body and work to scrap a 30-year-old emergency law. He also said the interior minister would appoint a human rights adviser, and human rights and civil society groups would have access to prisons. 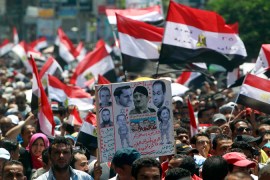 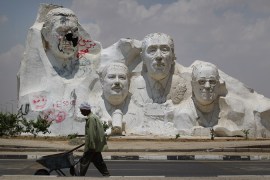 Key dates in the political development of a country that once played the dominant role in the region. 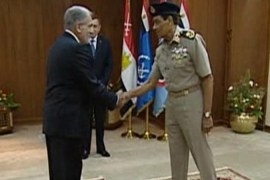 More than half of the ministers changed in reshuffle as military council faces pressure for faster and deeper reforms.